In a Confirm or Deny interview with the New York Times, billionaire tech investor Peter Thiel 'confirms' the age of Apple is over.

Answer: Confirm. We know what a smartphone looks like and does. It’s not the fault of Tim Cook, but it’s not an area where there will be any more innovation.
---

Thiel appears to be suggesting that Apple may not be able to produce another revolutionary product. Of course, executives at Apple feel differently. In a recent interview with Backchannel SVP Phil Schiller said he hopes that people will look back at the iPhone and say:

“Wow, they didn’t realize how much was to come — in fact, others missed it because they were busy running around looking for other things. Everyone has their opinions at this point, but it could be that we’re only in the first minutes of the first quarter of the game,” he says. “I believe this product is so great that it has many years of innovation ahead.”

Do you think Apple's last great product is the iPhone? Sales have slowed though Apple is rumored to be introducing an exciting new tenth anniversary device later this year. Will the company be able to disrupt or even create another industry? Let us know what you think in the comments! 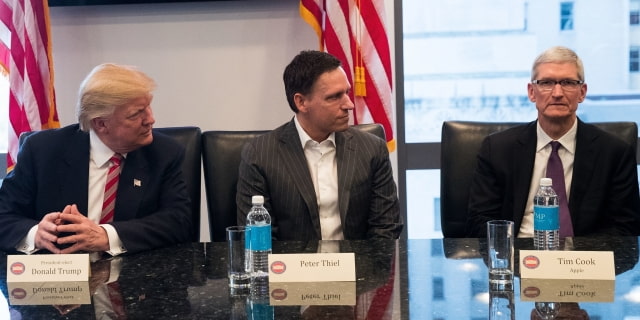 Lewis Salter - January 15, 2017 at 3:31pm
I Think apple should stay in the business and make more products they have already made the computer A LOT better and quite recently too, by putting a touch bar at the top of the Mac where you can use touch ID and scroll through emojis and much more not only that they have CREATED touch screen and samsung have copied them with the touch ID, Touch screen and the design and just think about it Apple always surprise us so keep creating your products
Reply · Like · Mark as Spam

Jon Ivy - January 15, 2017 at 2:36pm
Definitely over ! Expect nothing substantial, just slices of 'innovation' to keep them and their ecosystem in the infinite game... The fact they created such a well functioning ecosystem however will protect them into the future...
Reply · Like · Mark as Spam