Global smartphone shipments reached a record 1.5 billion in 2016, according to a new report from Strategy Analytics. Apple captured first place in Q4 2016 with 17.8% market share; however, over the full year, Samsung easily took first with 20.8% market share compared to Apple's 14.5%.

Linda Sui, Director at Strategy Analytics, said, “Global smartphone shipments grew an improved 9 percent annually from 403.0 million units in Q4 2015 to 438.7 million in Q4 2016. This quarter was the smartphone industry’s fastest growth rate for over a year. Smartphone growth is recovering slightly due to stronger demand in major developing markets like China and Africa. Global smartphone shipments grew 3 percent annually from 1.44 billion in full-year 2015 to a record 1.49 billion in 2016.”

Neil Mawston, Executive Director at Strategy Analytics, added, “Apple shipped 78.3 million smartphones worldwide and captured 18 percent marketshare in Q4 2016, rising a steady 5 percent annually from 74.8 million units in Q4 2015. This was the iPhone’s best performance for over a year, as Apple capitalized on Samsung’s recent missteps. Samsung shipped 77.5 million smartphones worldwide in Q4 2016, dipping 5 percent annually from 81.3 million units in Q4 2015. Samsung lost momentum in the quarter as a result of its Note 7 battery fiasco. Samsung captured 18 percent share for the quarter and 21 percent share for the full year, its lowest level since 2011. Samsung will be banking on the rumored Galaxy S8 model in a few weeks’ time to reignite growth and return to the top spot in quarterly smartphone shipments. On an annualized basis, Samsung maintained first position with 309 million units shipped worldwide in 2016.”

Woody Oh, Director at Strategy Analytics, added, “Huawei maintained third position with a record 10 percent global smartphone marketshare in Q4 2016, the first time the company has ever reached double figures. It was an impressive performance. Huawei is struggling at home in China against rivals like OPPO, but its overseas performance in markets like Western Europe is accelerating due to improved smartphone designs, more sophisticated marketing, and deeper retail distribution.”

Linda Sui, Director at Strategy Analytics, added, “OPPO held on to fourth position and grew a robust 99 percent annually to capture a record 7 percent global smartphone marketshare in Q4 2016, almost doubling from 4 percent a year ago. OPPO has grown swiftly in China with popular Android models such as the R9. OPPO’s next challenge in 2017 is to expand beyond China and continue its momentum in emerging regions like India and Nigeria. Vivo maintained fifth place with a record 6 percent marketshare in Q4 2016. Like OPPO, Vivo is very popular in China and it continues to strengthen its portfolio with upgraded smartphone models like the X9 and upcoming V5 Plus with 20MP dual-camera functionality.” 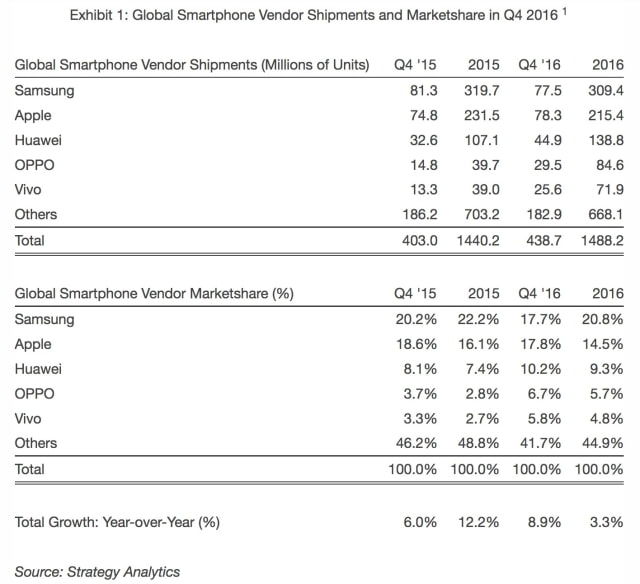