Google has overtaken Apple as the World's Most Valuable Brand, according to the latest Brand Finance Global 500 report.

Apple has held the top position in Brand Finance's list for the past five years; however, this year Brand Finance found that Apple 'over-exploited the goodwill of its customers' leading to a 27% drop in brand value.

-----
Apple has for the last five years held sway as the world’s most valuable brand. Apple was once a paragon of branding excellence. It has a meticulously constructed, sleek and innovative visual identity that runs consistently through all its products, services and retail sites. Its mono-brand structure created marketing efficiencies and helped to cement its logo as an icon of the 21st century. Reliability, user-friendly interfaces, knowledgeable staff and, most importantly, its transformative technology meant that the brand fulfilled its promises. Loyalty and advocacy reached cultish proportions with fans waiting days outside Apple stores for the latest release. However, Apple’s evangelists are beginning to lose their faith. The snaking queues of early adopters have shrunk almost to the point of invisibility. Apple has failed to maintain its technological advantage and has repeatedly disillusioned its advocates with tweaks when material changes were expected.

Put simply, Apple has over-exploited the goodwill of its customers, it has failed to generate significant revenues from newer products such as the Apple Watch and cannot demonstrate that genuinely innovative technologies desired by consumers are in the pipeline. Its brand has lost its luster and must now compete on an increasingly level playing field not just with traditional rival Samsung, but a slew of Chinese brands such as Huawei and OnePlus in the smartphone market, Apple’s key source of profitability.

Brand Finance’s analysts had remained bullish about Apple’s potential to recover its lost momentum, but the rot has now truly set in, with brand value falling 27% since early 2016 to US$107 billion, which sees it lose its status as the world’s most valuable brand. Apple’s loss has been Google’s gain. Six years after it last held the title in 2011, Google is now the world’s most valuable brand with a value of US$109 billion.
-----

Has Apple's brand value dropped in your eyes? Let us know in the comments! You can find the full Brand Finance report linked below. 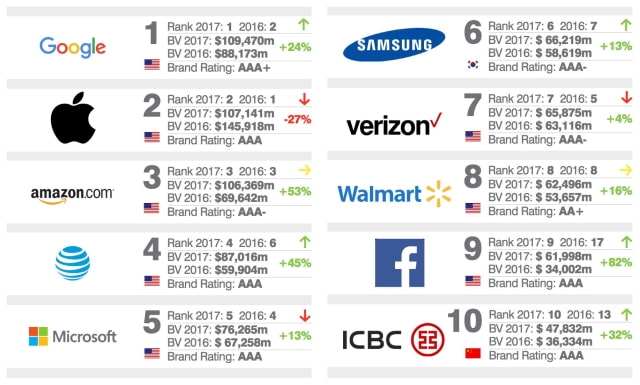 Jackfrost9876 - February 6, 2017 at 5:26am
I bucked jumping on the Apple train for almost 30 years. My first Apple product was the IPhone 3GS. Up until the IPhone 6 things seemed to get progressively better to the point that it was actually exciting to see what's coming next. After the IPhone 6 both the company and their products seem to be loosing their innovation, reliability, quality and 'Appleness' for lack of a better word. Their new MacBook Pro is a clear indication that they are more interested in their vision than what their customers want and need. Not that Steve Jobs didn't go with his vision, the difference is that he actually had vision. Now Microsoft is out Appling Apple and Apple should take notice. A lot of my tech friends who loved Apple are excited about the new Surface Pro product line. The 27% drop in company value is directy inline with the confidence of Apple's customers, myself included. I've lost a lot of faith in Apple and even considered looking at the Samsung products. I'm still hoping Apple will pull something worthy of their name out of the hat in the IPhone 8. I'm just not that excited about what's next for Apple like I used to be. Hint to Apple: Listen to what your customers need and want and YES, read the forums!!!
Reply · Like · Mark as Spam

Raas Al Ghul - February 4, 2017 at 1:28am
I'm no big Apple fan but I still think they make the biggest amount of quality products innovation nowadays is harder than a decade ago I still think Apple is a better company they only deal with a few select markets whereas Google has a wider product portfolio so in that aspect I think Apple is better
Reply · Like · Mark as Spam