Apple has just weeks to fix issues relating to Touch ID on the upcoming iPhone 8, according to a KeyBanc Capital Markets analyst Andy Hargreaves. Following conversations with supply chain sources, Hargreaves believes Apple is still having problems with integrating Touch ID capabilities into the iPhone 8.

"Apple continues to struggle with the workaround for the fingerprint sensor,” writes Hargreaves, "This increases the potential that the new OLED iPhone could be delayed, or ship without a fingerprint sensor, either of which could increase risk to unit sales and mix for the cycle."

It's believed that Apple is attempting to put a fingerprint sensor in the screen of the next generation iPhone; however, multiple sources have suggested that the technology may not be ready for production.

We believe it would typically take 12 weeks from placement of fingerprint IC orders to full volume production of iPhones. Consequently, if Apple is able to solve its fingerprint problems and place orders for fingerprint ICs before August, it would likely be able to reach volume production in late October or early November. We believe this remains Apple's preferred path, and expect it would be acceptable to both consumers and investors. It is entirely unclear if Apple will be able to fix the problem in this time frame.

Similar to a recent Ming-Chi Kuo prediction, KeyBanc suggests that it's increasingly likely that Touch ID will be dropped for facial recognition.

Abandon the fingerprint sensor entirely and rely solely on facial recognition for login and authentication. This option appears increasingly likely as time passes, but is far from ideal. We believe Apple’s facial recognition solution should work from many angles and in low-light environments. However, it would not work without clear line of sight to the user's face. Even if this encompassed just 5% of login scenarios, it would mean that several times a day the new iPhone would perform worse at an elemental feature than older iPhones, which would risk pushback from consumers. Further, we do not believe facial recognition would be initially qualified as an acceptable verification method for Apple Pay. While Apple could achieve this over time, the likelihood for an initial lack of Apple Pay could adversely affect demand.

While considered unlikely, a delay until mid-November wouldn't have a meanful impact on KeyBanc's expectations. Any later and iPhone mix and total unit volume for F2018 would be affected. 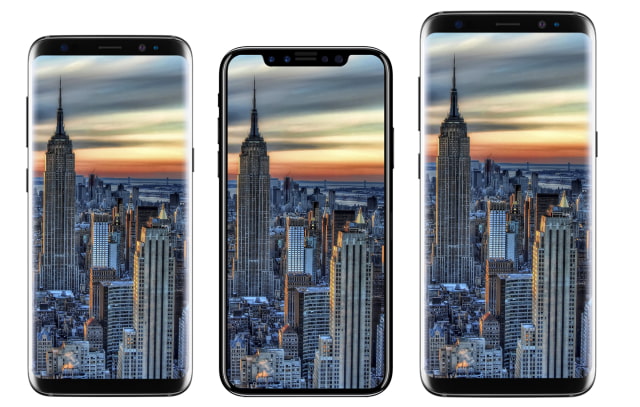 Apple for evr - July 11, 2017 at 12:03pm
Wtf look like samsung galaxy s8, what are you trying to prove by Copy samsung design? Anyway we all know samsung is years ahead of apple. Being an isheep i feel very lost and embarrassing now
Reply · Like · Mark as Spam

GetDaFKOUT - July 12, 2017 at 2:43am
If you feel Samsuck is years ahead f Apple, why are you here? My sister has the latest Samsung device and it still sucks and eventually locks up.
Reply · Like · Mark as Spam

D4xM4Nx - July 11, 2017 at 7:17am
Either this is drama for the hype and lolz, or Apple is genuinely having issues with Touch ID. Apple: Take time to sort out all problems first, quality should be above everything else. Customers sure as hell appreciate all efforts put into it.
Reply · Like · Mark as Spam

Luka - July 10, 2017 at 5:16pm
Hey is there any chance to change button on SE with some different unnlocking?
Reply · Like · Mark as Spam
3 More Comments
Recent