A class action lawsuit has been filed against Apple following the company's admission that it has been slowing down older iPhones to prevent unexpected shutdowns as their battery degrades.

TMZ reports on the lawsuit:

A new class action suit has been filed by Stefan Bogdanovich, an L.A. man who, like millions of other people, uses an iPhone ... but not an iPhone 8. He claims Apple's tactic of slowing down older iPhone models causes users to suffer -- specifically those with the 7 or 7s -- and take a hit to their wallets.

Bogdanovich believes that the slowdown is a ploy by Apple to get users to upgrade devices. Others believe the company is covering up an iPhone 6s design flaw. Whether or not any of these claims are true, Apple didn't disclose what it was doing to users and thus we're likely to see more of these lawsuits in the near future.

You can read more about the 'iPhone slowdown' here. 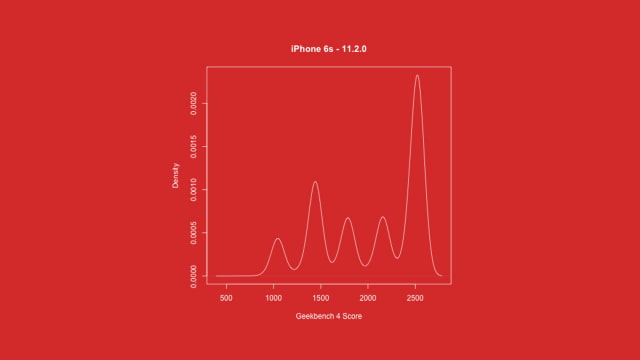 Bruc3ly0001 - January 2, 2018 at 5:45pm
The main issue is Apple forcing consumers to update their firmware on all their devices. After iOS 10 there is no way of turning that annoying pop up telling you to update your firmware. What is worst, if you goto your iCloud storage setting they automatically already downloaded 1.4gig of the newest firmware waiting for you to accidently to click update when those pop up takes over your screen. Before Tim Cook took over Job never had so many firmware update within a year for that device. Now it's like every month or so they release new firmware. Because of this firmware BS it affects all devices. My iPad 2 works flawlessly like brand new from the day I bought it. But after to update to its latest Fw it allows at 9.3.2 surfing the net and opening apps like I'm on dial up speed. Makes it useless forcing you to buy new iPad. Easy to proof what Apple doing. Go buy a brand new iPhone 6s and test opening apps and surf the net. Then update your firmware see the big difference. Apple basically telling you your brand new iPhone 6s is old because you updated your firmware. Few years ago I updated one of my iPhone 5 Fw because of course what is first thing they tell you to do over phone support or at store update your firmware and my phone was running hot and eventually overheated the battery and it won't turn on anymore. They said of course out of warranty so tough luck and buy a new iPhone 5 or the newest iPhone 7. Other time I had issue they just say I'm imagining things. Have you ever notice when your warranty run out they treat you like shit. Even with warranty before you take to store and tell them issue they either replace really quick or make a note and if issue don't resolve bring it back. Now since iPhone 7 release they put your iPhone on this cradle and they do this stupid test that beep few time and on their screen it diagnose any issue. Who makes that program? Apple. So if their little diagnose tool doesn't come back to give no error even if you under warranty your out of luck and stuck with that defective device unless you keep complaining. It's all a scheme to make money. Sure a company should make money but not by lying to your loyal customer and do things like this. Why you think steve Job was so loved. He never did stuff like this and he made a lot of money for the company. Tim Cook is all business. Anyway to make money even if he has to lie. My advice never update your firmware from day one. Your phone will work like new except your battery won't run on full charge which is a norm. I have friends and family still using their iPhone 4 and runs perfectly. Sure they can't run the newest app but they sure can surf the net without lagging. Now a days Apple innovation is emoji. Who cares about animoji. They expect you to pay $1000 for iPhone X for facial recognition so you can use Animoji. What a joke. Make a phone that can run at least a full day without me charging my brand new phone. Or telling me to tweak my phone turning this and that off so I can get some extra usage out of my phone. What is whole point of having all these feature if I need to turn it off so I can run few extra minutes to talk or surf the net. Just don't update your firmware and keep your old device and you can use your premium iPhone for many years to come. I'm still using my iPhone 7 like its new and my iPad Air 2 still runs fast. If I am a company and someone uses my Device I sold 10 years ago I would be proud. These customer will freely buy your device and recommend to others when they need to. Not doing all these crap behind their back and telling us we are imagining things. Peace out and happy new year. Hope Apple fix their issue and fire Tim Cook with all these Emoji crap and hire a true innovator like or at least close to Steve Job.
Reply · Like · Mark as Spam
0

4 leaf clover - December 24, 2017 at 4:55am
100,00"s of people say there device is slow , GO TO apple , they say the battery is fine and nothing is wrong. This was a INTENTIONAL LIE. They new IOS was slowing down devices power, and claimed customers where wrong, or crazy . They should be held accountable.
Reply · Like · Mark as Spam
0

4 leaf clover - December 24, 2017 at 4:52am
Like i said last week . This is class action lawsuit , and most illegal to intentionally manipulate a phone to reduce CPU power.. They appear to intentionally most likely including programming hidden in the chips to influence this. The the chips could have some inside code , other then IOS BUILT in . To intentionally manipulate a device"s speed is FRAUD. People pay for device to work at full speed for duration of the warranty . However NEW IOS VERSIONS , also probably increase the heat on the processing power. I notice on on IOS 11 many games get substantially HOTTER , they are using more power in the CPU, drawing MORE HEAT , which causes the battery to become useless propbaly in 6 months. THEY WILL LOOSE THE LAWSUIT. They have to fully disclose they changed a user device with out consent. They intentionally lowered the CPU SPEED , which is most illegal , with out getting consent from the owners. They also did not disclose this information
Reply · Like · Mark as Spam
0

Imran - December 22, 2017 at 3:26pm
I didn’t pay 1000$ to know my phone won’t be at its peak after a year due to a weak battery. This is a outrageous decision and made all iPhone users a launching stock. As android users will ask us after year? Is your android running full speed or half.
Reply · Like · Mark as Spam
0

Brick City - December 22, 2017 at 1:54pm
Isn’t the point of updating an iOS is to improve on an older version? I get it but if it was not meant for Older Devices then why not Cap it off on Certain iOS. Rather then slowing the Damn Devices down or even Bricking them. All I know is that it happened to me years ago and even now on another Device. I know Apple knew about it and they kept denying about it. I hope this Lawsuit will do some good.
Reply · Like · Mark as Spam
25 More Comments
Recent