Cetizen has published the results of a burn-in test that compares how the OLED display on the iPhone X performs in comparison to the Samsung Galaxy S7 Edge and Galaxy Note 8.

Conditions were the same for each device. Brightness was set to maximum, auto brightness was off, and Blue Light and True Tone were turned off. For the Galaxy devices, an app needed to be installed to prevent the displays from turning off after ten minutes. 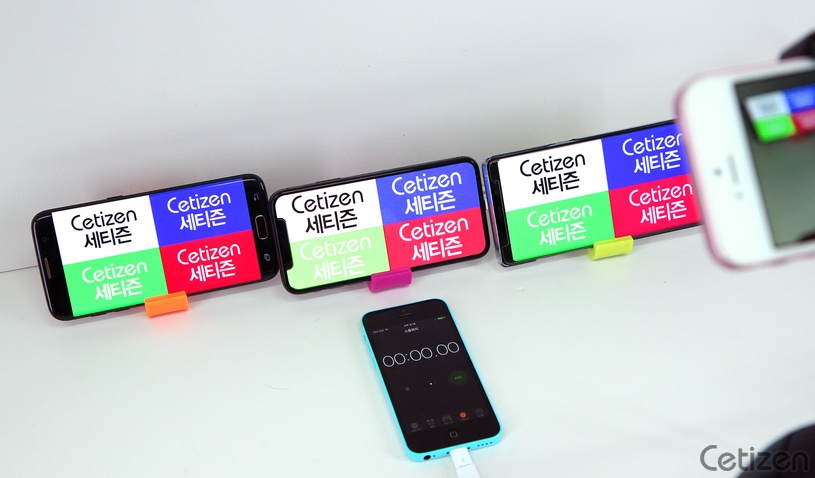 At 62 hours, the Galaxy Note 8 showed a sudden noticeable burn-in. At 84 hours some slight burn-in can be seen on the iPhone X display.

After 90 hours, Cetizen notes, "You can easily check the status of the burn-in if you hold it a little closer, and you can see that the burn-in condition has become serious. The Galaxy Note 8, which was very good at the beginning, is burning at a dreadful rate as burning starts, and the iPhone X is steadily getting stronger. But ... what is going on with the Galaxy S7 Edge? I guess the Galaxy S7 Edge has a relatively low heat."

After 155 hours, slight burn-in is observed with the Galaxy S7 Edge. The iPhone X did not get any worse, "It is not uncomfortable for normal use." Burn-in on the Galaxy S8 progressed rapidly and it's easy to see with the naked eye.

At 162 hours, Cetizon notes, "burning is ongoing to Galaxy S7 Edge, which has very fine afterimages like today, iPhone X with a faint afterimage, and Galaxy Note 8 with a clear afterimage."

Interestingly, at 179 hours, burn-in on the iPhone X is not as clear as before. "It is still visible, but it is not as bad as it should be." Also a 'flickering' phenomenon is observed with the Galaxy S7 Edge. "The faster the flickering, the slower the burn-in becomes." 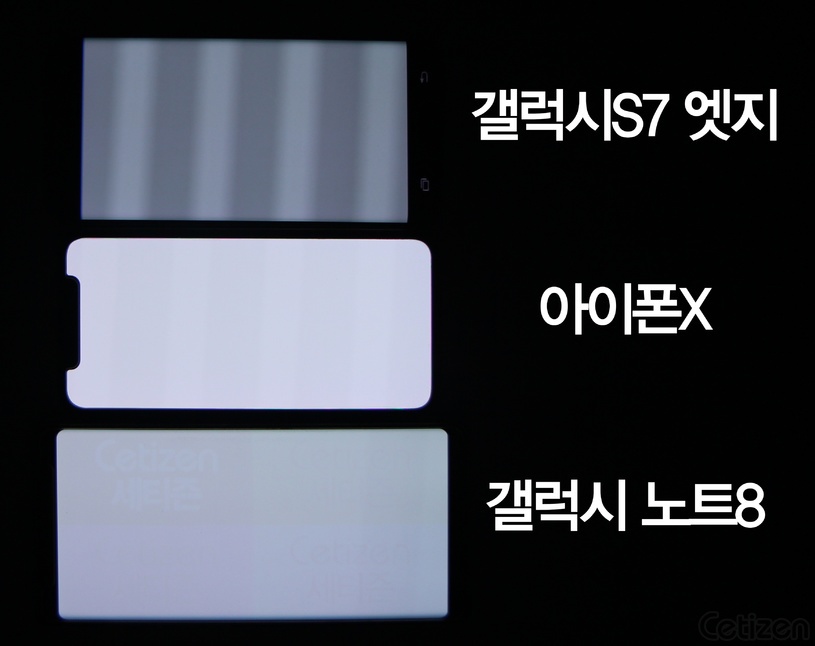 Observations continue at regular intervals until Cetizen called it quits at 510 hours and 22 minutes. As you can see in the photos and video below, burn-in is quite noticeable on the iPhone X, especially when on the camera view; however, it does appear to have outperformed the S7 Edge and Note 8.

I did not start the test because I thought the iPhone X would not have burn-in. As mentioned in the introduction, there are various test images such as drop test and waterproof test, but I did not test or comment on burn-in, so I tried it myself. The reason why we tested the Galaxy S7 Edge and Galaxy Note 8 together was because it was not to make a comparison or a confrontation between the iPhone and the Galaxy, and we wanted to find out the burn-in time at the maximum brightness limit hanged by Samsung and Apple. Of course, the main character of this test is the iPhone X. Equally Samsung's OLED display was installed, but the color and shape of the afterimage were slightly different. After all, the results of the 510-hour test have all been the same, but it's a little strange that the afterimage pattern in certain background colors is different. Once on the OLED display, the afterimage is inevitable with current technology. However, since it is stronger than burn-in, it is unstable if you do not use it in the same situation as the test, but it is enough to worry about burn-in to some extent. 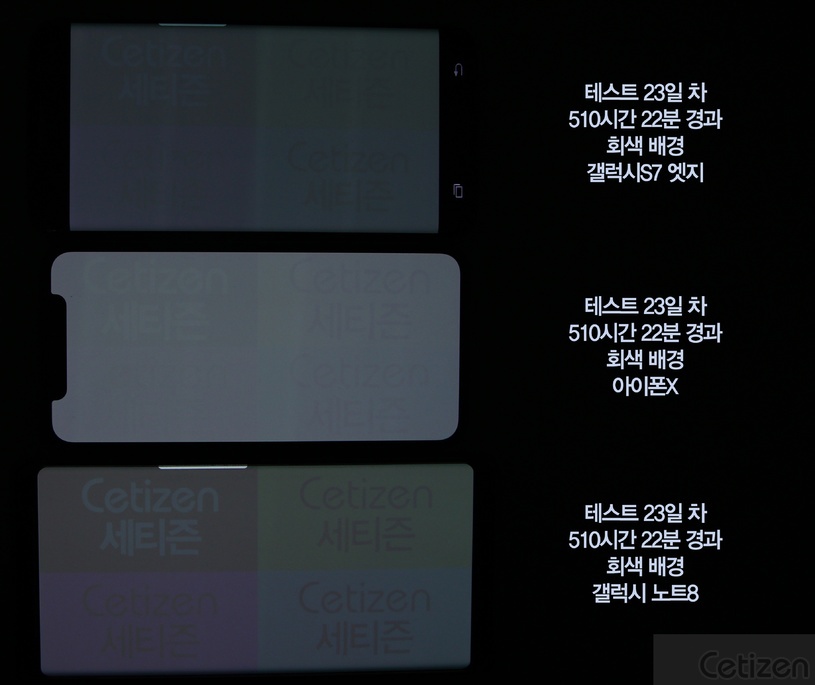 Apple says it has engineered the Super Retina display to be the best in the industry in reducing the effects of OLED "burn-in". This test appears to confirm that under normal usage conditions, iPhone X owners likely do not need to worry about it. 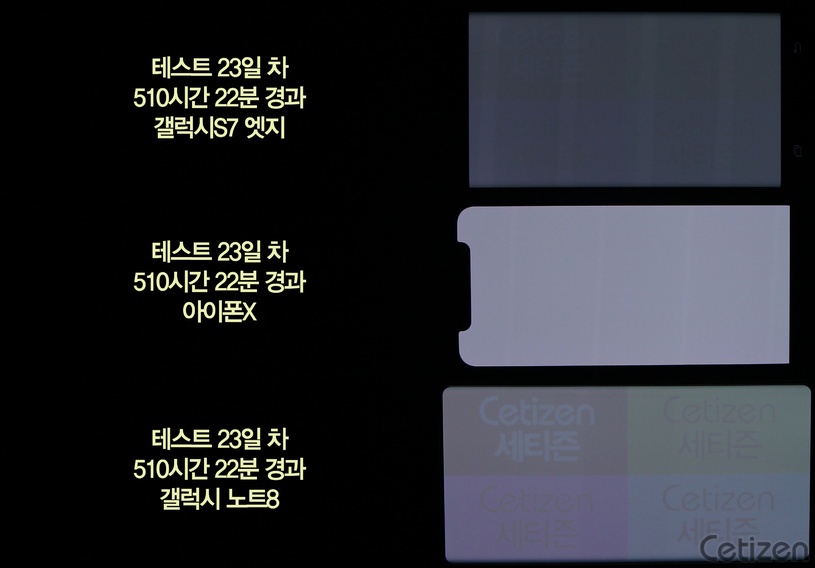 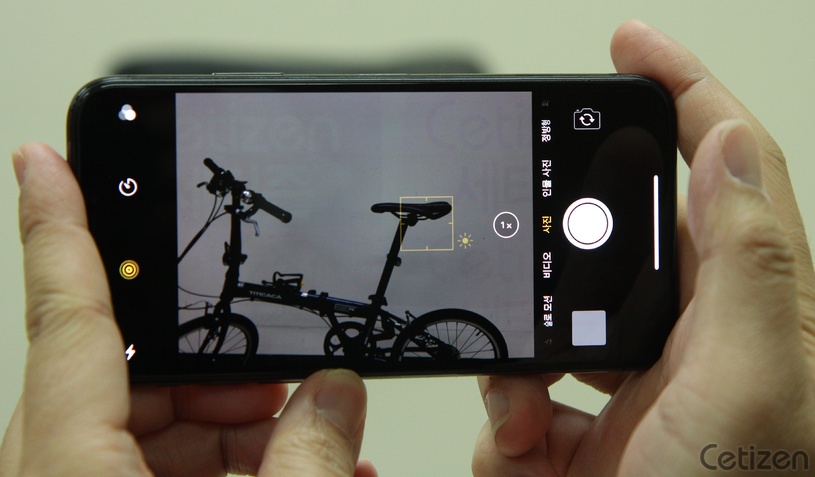 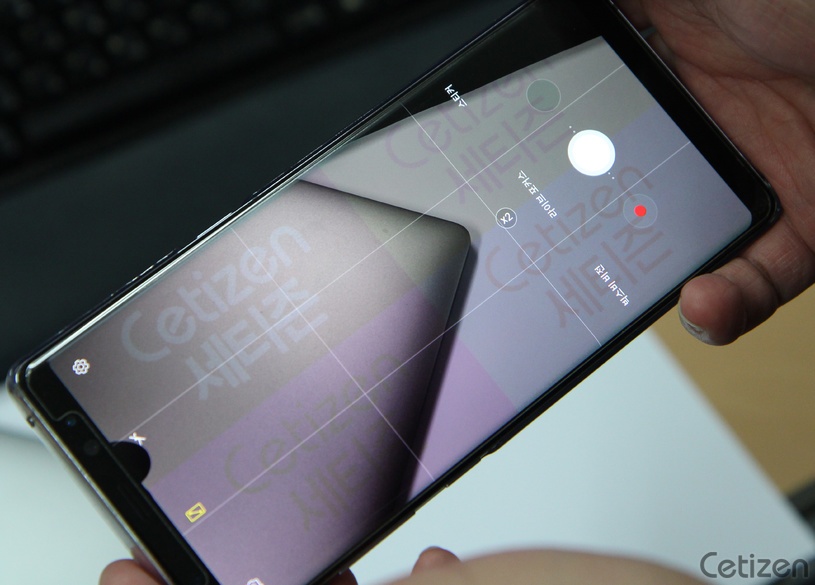 D4xM4Nx - January 4, 2018 at 8:42am
Crazy numbers huh... Anyway the right thing to do, is being careful with your iPhone. Goes a long way in how well it works and holds great resale value when the time comes.
Reply · Like · Mark as Spam

morecrap - January 5, 2018 at 3:35am
Your iPhone is not real estate, nor is it your automobile. You don't buy an electronic gadget to hold resale value. You buy it to use it and enjoy it. If one's going to have to worry about display burn in and other problems, I'd recommend buying something else. When you're spending that much money, you expect perfection, or something like it. iPhone X is just not worth it. Buying an iPhone X is like buying an expensive Swiss watch. You pay for the quality of work and the quality of components used.
Reply · Like · Mark as Spam

Raas al Ghul - January 3, 2018 at 11:28pm
I’m sure this will put a lot of iPhone X users minds to rest and also proves that Apple is still good at bringing something that’s been around for a while on other devices better on Apple devices.
Reply · Like · Mark as Spam