A new report from Loup Ventures estimates that only 16% of global iPhone users have turned on Apple Pay. That leaves Apple with plenty of room to grow the service over the next 3-5 years.

Active users have doubled in the past year, transactions have tripled and online merchant adoption has increased by about 50%, according to Loup.

Here's some highlights from the report:
● We checked the Top 100 retailers in the U.S. for Apple Pay compatibility for online (desktop, mobile and apps) and found the growth of adoption has been high (9 to 85%), but off of a small base.
● The total number of these retailers supporting Apple Pay online now ranges between 14-24% (details in table below).
● The number of banks globally that support Apple Pay increased in the past year by 41% to 2707 banks.
● We believe there are 127m global active Apple Pay users, up from 62m a year ago. This represents 16% of the active iPhone base.
● We don’t have any data on Apple Pay peer-to-peer (Venmo competitor), which launched in December of 2017. 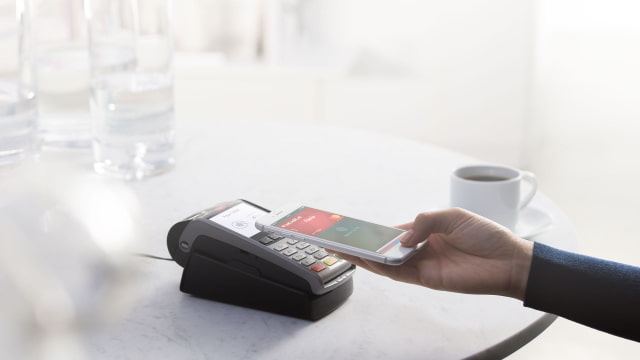 D4xM4Nx - February 23, 2018 at 10:58am
I'm surprised that the U.S. is lagging so much when it comes to card less payments or overall banking... We may never see Apple Pay here, I can only remember two, maybe three establishments offering something similar to Apple Pay. No way in hell NFC tech is widespread, let alone even available as a standard for daily usage. I've had problems purchasing stuff online or paying for services, apps have lots of issues handling CCs or simply lack the tools.
Reply · Like · Mark as Spam

chirod76 - February 22, 2018 at 11:18pm
For such a developed country US has long ways to go when it comes to banking.. I travel often to Europe and my recent trip(2 weeks ago) I didn't have to get my card out of the wallet once, they use a tap (RFID) on their debit/credit card so ApplePay is basically accepted. US they are still trying to understand if they should swipe or stick in the card lol
Reply · Like · Mark as Spam

John Simmons - February 22, 2018 at 4:43pm
I use an iphone 8 and Galaxy s8 (office and personal phones). I have used Apple pay and Samsung Pay. Samsung pay wins hands down. Its easier to pull up, can be literally used anywhere(even old terminals), its rewarding t use it. And also have a gear s3 which works everywhere - even if the merchant has blocked NFC payments. Apple Pay has a long way to go.
Reply · Like · Mark as Spam

Aneda Toke - February 23, 2018 at 2:41am
I have no idea how Samsung does it but on my iPhone X all I gotta do is double press the side button and then face ID the thing and bam...tap away. I love it. Use it every day.
Reply · Like · Mark as Spam
3 More Comments
Recent