Google has announced the first developer preview of Android P is now available bringing several new features include support for devices with a notched display.

Looking ahead, today we're sharing the first developer preview of Android P, the newest version of Android. It's an early baseline build for developers only -- you're our most trusted reviewers and testers ;-) Early feedback from our developer community is crucial in helping us evolve the platform to meet your needs. We'd love to get you started exercising the new features and APIs in P, and as always, we depend on your early feedback and ideas, so please give us your input!

Here's a look at a few of the new features in Android P:

● Indoor positioning with Wi-Fi RTT
Android P adds platform support for the IEEE 802.11mc WiFi protocol -- also known as WiFi Round-Trip-Time (RTT) -- to let you take advantage of indoor positioning in your apps. Knowing the distance to 3 or more APs, you can calculate the device position with an accuracy of 1 to 2 meters.

● Display cutout support
Now apps can take full advantage of the latest device screens with fullscreen content. We've added display cutout into the platform, along with APIs that you can use to manage how your content is displayed. 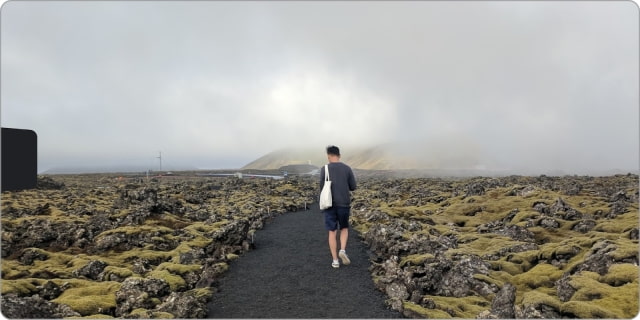 ● Improved messaging notifications
Try the new MessagingStyle notification style -- it highlights who is messaging and how you can reply. You can show conversations, attach photos and stickers, and even suggest smart replies. 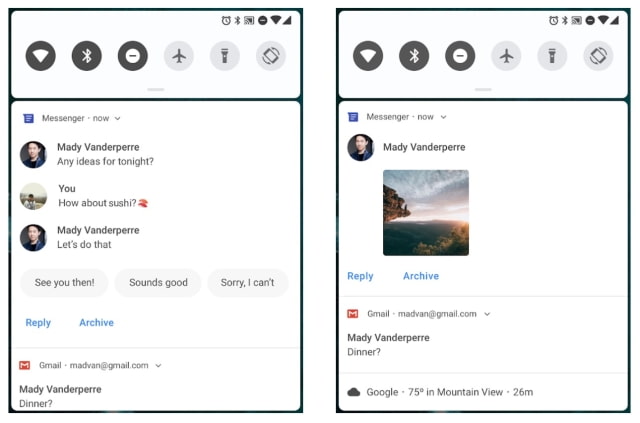 ● Multi-camera API
You can now access streams simultaneously from two or more physical cameras on devices running Android P. On devices with either dual-front or dual-back cameras, you can create innovative features not possible with just a single camera, such as seamless zoom, bokeh, and stereo vision. The API also lets you call a logical or fused camera stream that automatically switches between two or more cameras.

Other improvements in camera include new Session parameters that help to reduce delays during initial capture, and Surface sharing that lets camera clients handle various use-cases without the need to stop and start camera streaming. We've also added APIs for display-based flash support and access to OIS timestamps for app-level image stabilization and special effects.

● ImageDecoder for bitmaps and drawables
Android P gives you an easier way to decode images to bitmaps or drawables -- ImageDecoder, which deprecates BitmapFactory. ImageDecoder lets you create a bitmap or drawable from a byte buffer, file, or URI. It offers several advantages over BitmapFactory, including support for exact scaling, single-step decoding to hardware memory, support for post-processing in decode, and decoding of animated images.

● HDR VP9 Video, HEIF image compression, and Media APIs
Android P adds built-in support for HDR VP9 Profile 2, so you can now deliver HDR-enabled movies to your users from YouTube, Play Movies, and other sources on HDR-capable devices. We're excited to add HEIF (heic) image encoding to the platform. HEIF is a popular format for photos that improves compression to save on storage and network data.

● Data cost sensitivity in JobScheduler
In Android P, JobScheduler handles network-related jobs better for the user, coordinating with network status signals provided separately by carriers. Jobs can now declare their estimated data size, signal prefetching, and specify detailed network requirements—carriers can report networks as being congested or unmetered. JobScheduler then manages work according to the network status. For example, when a network is congested, JobScheduler might defer large network requests. When unmetered, it can run prefetch jobs to improve the user experience, such as by prefetching headlines.

● Open Mobile API for NFC payments and secure transactions
Android P adds an implementation of the GlobalPlatform Open Mobile API to Android. On supported devices, apps can use the OMAPI API to access secure elements (SE) to enable smart-card payments and other secure services. A hardware abstraction layer (HAL) provides the underlying API for enumerating a variety of Secure Elements (eSE, UICC, and others) available.

There are many other improvements in Android P that are described in more detail at the link below. 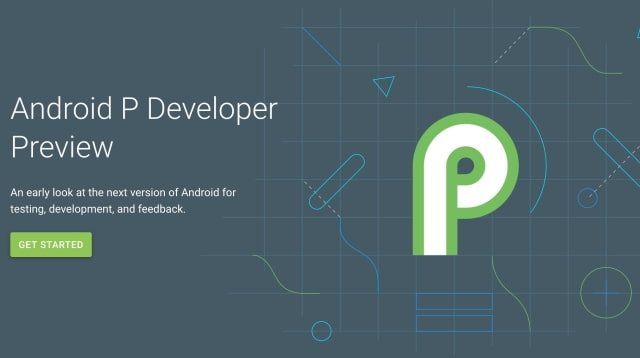 Samsheep - March 8, 2018 at 6:00am
Everyone copies eachother okay. Not like people make a living like this all the time. T_T I don't get how Apple copies others based on making their phones bigger since the first iPhone that's Kickstarter the trend of the small sized phones that other companies expanded on, but regardless, Apple uses their own materials if not make their own HD display (which is fused that other companies done as well afterwards) that are probably assembled differently. My point is that if they're going to expand on size, then the least that can come close to copying it using materials if not the dimensions of the phone itself, but still, no one can avoid copying at least one thing in their lifetime.
Reply · Like · Mark as Spam

iSheep - March 8, 2018 at 2:08pm
Lol now your admitting Apple copies!? Just making my point because I remember people like you swore Apple never does! :-) Apple just doesn’t only copy’s but steals from jailbreaks. :-p
Reply · Like · Mark as Spam

Haider - March 8, 2018 at 2:05am
In app cutout! The notch!!!!!! Lol! So I guess it’s copying Apple now! Are they waiting for Apple to completely eliminate the notch one day so they can copy it too?
Reply · Like · Mark as Spam
Recent