Apple has announced that iOS 11 adoption has reached 76% as measured by the App Store on April 22nd.

Take a look at the chart below! 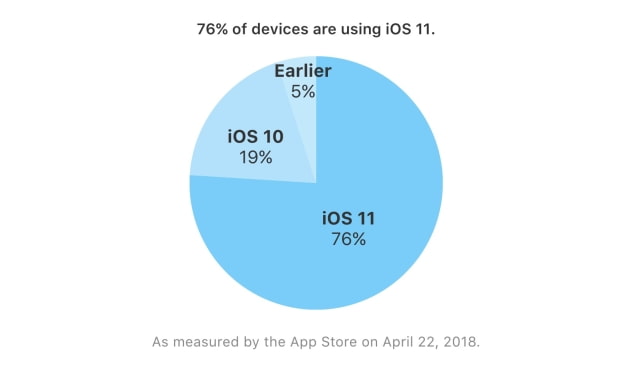 iSheep - April 26, 2018 at 1:01pm
Yes Apple’s such a great company! Yes they let you do whatever you want on a device that you paid for. Duhh! That’s why you sheeps complain about a great company. Lol
Reply · Like · Mark as Spam

D4xM4Nx - April 26, 2018 at 12:33pm
Ya know right? There are ways to stop the OTA daemon on its tracks for good, without a jailbreak... I've heard cases of forced updates when iPhones get plugged to the outlet and the iOS updates itself, can't tell if they're legit or not. My older iPhone stays on iOS 10 no matter what! The X came with 11, no choice here. Apple can't tell how many of these updates were 'accidental' lol.
Reply · Like · Mark as Spam

Lo - April 25, 2018 at 11:29pm
More like force adoptation, fawkin apple! We should have every right to be in whatever version of ios not to be controlled by apple. Communism on apple's part. Security my Ass!
Reply · Like · Mark as Spam
3 More Comments
Recent