A jury has unanimously determined that Samsung must pay Apple $539 million for infringing five patents in a legal battle that has spanned seven years, reports CNET.

Samsung argued that a penalty of $28 million was appropriate and Apple was looking for $1.07 billion in damages.

Apple believes Samsung's stance would mean a carmaker could build something just like a Volkswagen Beetle but then pay damages only based on the outside shell, but Samsung thinks Apple's stance would mean a company infringing a cupholder design would have to pay patents on an entire car. Samsung didn't fight Apple's suggested $5.3 million penalty for infringing two utility patents.

The jury awarded damages that were roughly half way between what both companies were looking for which will help establish the importance of design patents in the tech industry.

The three design patents in the case were: 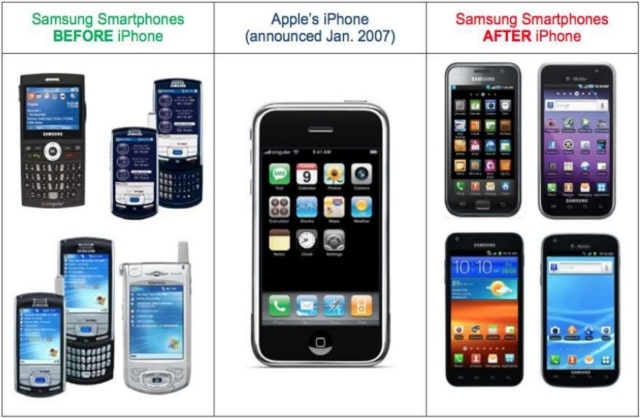 crz6662 - May 26, 2018 at 8:41pm
Seriously gonna patent the shape of the screen ? Morons. So I guess your going after all the other phone manufacturers too ? Don't forget, Samsung is supplying the screens for your iPhones...
Reply · Like · Mark as Spam

iSheep - May 25, 2018 at 6:48pm
Lol that could be true! This is Apple’s way of getting their discount from Samsung! Either way, the consumer will pony up the money both companies loses. So I guess no one wins! LMMFAO!!
Reply · Like · Mark as Spam

nocci - May 25, 2018 at 11:50am
I don't care what you say about this or me, they deserve it after the half **sed attempt to insult iPhone over slowdown after getting some shit wrong about it.
Reply · Like · Mark as Spam
7 More Comments
Recent