This article was posted on Apple's site but it does a good job so I'm reposting it here to help anyone who needs it.

Your MacBook computer has two memory slots that you access by removing the memory door in the battery bay. Your MacBook comes with at least 512 megabytes (MB) of 667 MHz Double Data Rate (DDR2) Synchronous Dynamic Random-Access Memory (SDRAM) installed.

Both memory slots can accept an SDRAM module that meets the following specifications:

Depending on the configuration of the MacBook you purchased, both memory slots may already be full. The maximum amount of memory you can install in your MacBook is 2 GB (using 1 GB DIMMs in both memory slots).

Note: For best performance, fill both memory slots, installing an equal memory module in each slot.

Step 1: Removing the Battery
1. Shut down your MacBook. Disconnect the power adapter, Ethernet cable, and any other cords connected to the MacBook, in order to prevent damaging the computer.

2. Turn the computer over.

4. Insert a coin into the slot and turn the latch a quarter turn clockwise to unlock the battery. The battery should pop up slightly.

5. Lift the battery out. 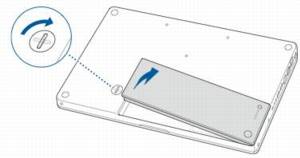 2. Pull out the long end of the bracket first to remove it from the battery bay of your computer. (Levers on the memory slot spring out when you remove the bracket.) 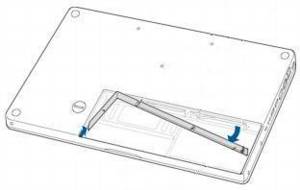 3. Touch a metal surface inside the computer to discharge any static electricity from your body.

4. If you need to remove a memory card, follow these instructions:

In one swift motion, use your thumb or index finger to move the lever to the left and release it. This swift motion ejects the memory card, and the lever then springs back to the starting position. Pull out the memory module(s).
Note: If any of the following issues occur, see an Apple-authorized service technician to complete the memory card installation:
* lever wobbles
* lever offers no resistance
* lever is stuck
* lever does not return to starting position 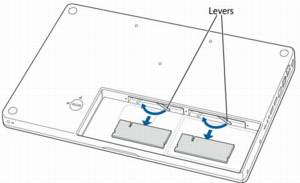 5. Insert the new memory modules into the slots:
1. Insert the gold edge first, with the notch on the left side.
2. Use two fingers with firm even pressure to push in the memory modules.
3. If the levers don't return to the closed position, move them to the right to close them.

Note: You may need to use increased firm pressure in order to ensure that the memory seats properly. Failure to seat the memory correctly could result in a "no power" situation, or the memory not being recognized by the system. 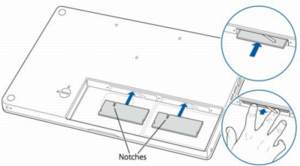 6. Replace the L-bracket by inserting the short end first and tightening the screws. 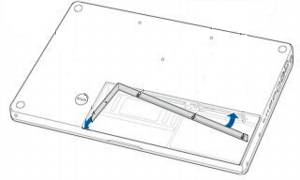 Step 3: To insert the battery
1. Place the right side of the battery into the battery compartment at an angle, as shown below. 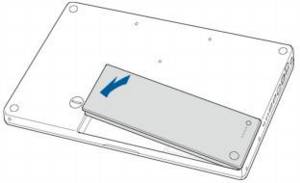 Emily - August 24, 2012 at 3:33pm
I have been looking everywhere and I would love an answer if any one knows. Do you need to back up your computer before taking out the old memory cards (if there are memory cards in there that is.) OR Are there memory cards automatically added in to new computers? I've had my computer for 4 years and I don't want to lose any information by replacing/adding memory. So Is there anything I need to do first?
Reply · Like · Mark as Spam
0

Elliot - October 2, 2012 at 9:59pm
No need to backup your data. (every time the computer is turned off the data on the ram/memory is wiped.) You can go to a crucial.com to find the correct ram/memory.
Reply · Like · Mark as Spam
0

Jan-Louis Spoelstra - March 11, 2008 at 1:29pm
I upgraded my Macbook with 2 x 2GB memory modules and now have a superfast 4GB Macbook - Everything working as it should.
Reply · Like · Mark as Spam
0

brooke - July 29, 2009 at 6:15pm
i am wondering if you ever had any problems. i am looking to upgrade my macbook from 2g to 4g.. everything continue to run smoothly?
Reply · Like · Mark as Spam
Recent