The backplane is responsible for turning individual display pixels on and off and plays a significant role in determining resolution, refresh rates, and power consumption.

IHS believes that Apple may increase the use of technologies such as Touch on TFE, LTPO TFT, and RGB stripe pixel to differentiate from Samsung's display technologies.

---
The new technologies Apple will apply onto the iPhone flexible OLED will include:
● Touch on TFE: This is used to simplify module structures like Samsung Display's Y-OCTA (Youm-On Cell Touch AMOLED) technology, because the current film's add-on touch needs an adhesive layer, and a thicker layer can achieve better optical performance.
● LTPO TFT: This is used to reduce TFT power consumption because the oxide TFT structure can reduce the current power-leakage problem of LTPS.
● RGB stripe pixel: On the iPhone X, the PenTile screen's 459 pixels per inch (ppi) is similar to RGB stripe 306 ppi, which is less than the 326 ppi on the iPhone's Retina LCD. This means that in the long term, Apple will need to further increase the resolution of iPhones or revert to the lower-resolution RGB stripe
---

As Apple moves to larger displays reduced power consumption is increasingly important. In theory, using an LTPO can save 5-15% in power compared to LTPS.

It's thought that Apple could ask suppliers to start deploying LTPO on the Apple Watch first, then the iPhone. 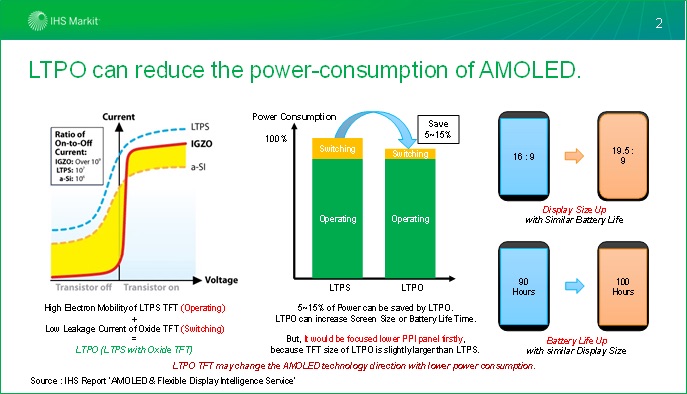