The company notes that the technologies are becoming 'must haves' for many consumers just a few years after being introduced. Both are showing rapid year-over-year penetration increases.

“This rapid adoption of smartphone mirroring is the unavoidable outcome of consumers thinking that automakers are being outperformed by smartphone software providers in certain areas,” said Kristin Kolodge, Executive Director of Driver Interaction & HMI Research at J.D. Power. “Most consumers consider phone systems better for navigation and voice recognition—and they’re free. ‘Better and free’ are hard to compete with, so automakers will inevitably have to cede this territory and will be much better served by focusing on areas where they are the exclusive provider—like driver assistance and collision avoidance—and continue to hone those systems.”

J.D. Power found that 19% of new vehicle owners with factory installed navigation don't use it. Of those 19%, 70% use another device, almost always a smartphone.

In the smartphone mirroring battle, drivers using Apple CarPlay report significantly higher satisfaction with the system than those using Android Auto (777 vs. 748, respectively, on a 1,000-point scale). However, Google fights back when it comes to navigation. Among owners who use their own navigation system, 56% use Google Maps most often and 16% use Google-owned Waze most often, while only 23% use Apple Maps most often. Even iPhone owners are more likely to use Google Maps than Apple Maps, whereas very few Android owners use Apple Maps.

Key Findings:
● Satisfaction improves across all categories: The increase in the overall satisfaction is due to gains across all categories in the study. Scores in comfort and convenience improve the most (+22 points), followed by collision protection (+18); smartphone mirroring (+15); driving assistance (+13); navigation (+12); and entertainment and connectivity (+7).

● Balance needed among collision avoidance systems: The Society of Automotive Engineers lists advanced driving assistance system features like adaptive cruise control; forward collision warning; lane-keeping assistance systems; and automatic parking as examples of Level 1[1] technology, which are fundamental building blocks to technically achieve higher levels of automation. Ultimately, the technology path will lead to a fully automated vehicle at Level 5. However, owners may lose trust or find the systems to be more of a bother than a benefit. Lane-keeping/centering system has the highest frequency (23%) of owners saying their system is annoying or bothersome. For automakers, this figure ranges from a high of 29% to a low of 7%. 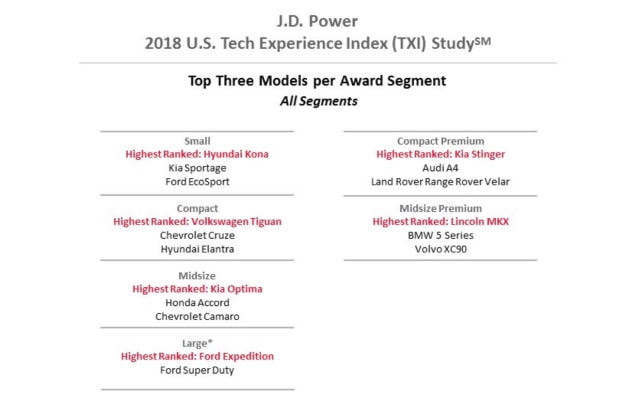