Apple's official introduction video for the iPad may reveal that the iPad does indeed run Flash, according to 9to5Mac.

Notice in the video below Apple shows the New York Times website being used. All the content on the page loads including those sections which are Flash.

Normally, we'd say that Apple simply did the renders in the Mac version of Safari and just CG'ed it into the video. However, you can see the page rendering and being resolution independent as well, so it is likely being done on an iPad. Note the iPad simulator in Dev Tools also doesn't render Flash.

It's possible, though we think unlikely, that Flash support could get added in a future version of the OS. It is more probable that Apple wanted a nice looking demo. 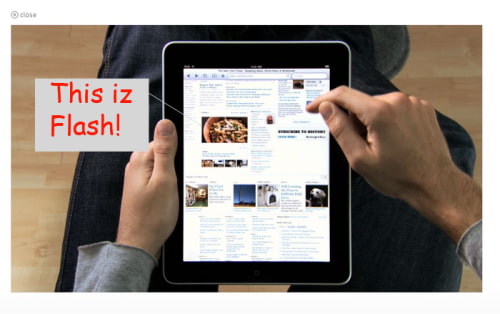 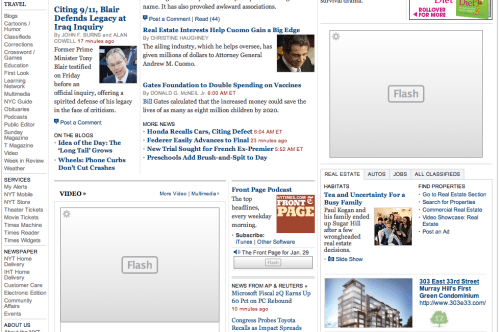 chris - January 29, 2010 at 1:09pm
All they did was fill in the blank spaces for the ad or the site knows the iPads user string and gives a formatted for iPad version with no flash. As its been said in the past flash and apple don\'t work well together
Reply · Like · Mark as Spam

David - January 29, 2010 at 2:55pm
The name is really bad... Mac\'s iPad = Maxipad (a popular feminine hygene product). What were they thinking? Only an ego as big as Steve Jobs could not listen to focus groups or not use common sense in naming the product.
Reply · Like · Mark as Spam