Apple has blocked a Facebook update that informed users of the company's 30% in-app purchase fee, reports Reuters via The Verge.

Facebook Inc on Thursday told Reuters that Apple Inc rejected its attempt to tell users the iPhone maker would take a 30% cut of sales in a new online events feature, forcing Facebook to remove the message to get the tool to users.

Apple said the app update was being rejected for showing 'irrelevant' information to users.

“Now more than ever, we should have the option to help people understand where money they intend for small businesses actually goes. Unfortunately Apple rejected our transparency notice around their 30% tax but we are still working to make that information available inside the app experience,” Facebook said in a statement.

The statement was present in a new tool that lets businesses host paid online events in order to offset revenue lost during the coronavirus outbreak. Facebook asked Apple to wave the 30% fee so that all of the event revenue could be passed to business owners, but the company refused. It then attempted to provide notice of Apple's cut to users; however, that was rejected by Apple as 'irrelevant' information.

Facebook tried to post a similar notice on its app for Android but that message appears to have been rejected by Google as well. 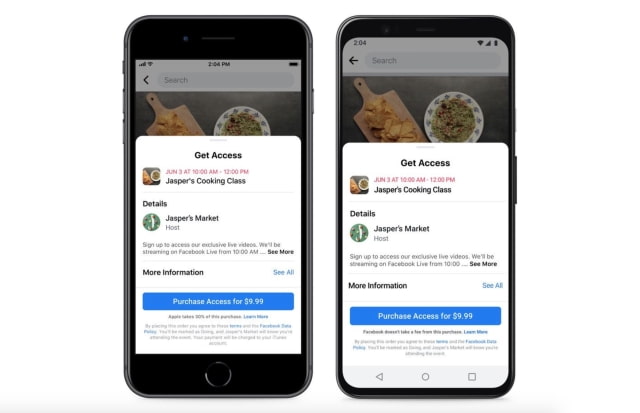 Griesel - August 29, 2020 at 7:57am
“Facebook doesn’t take a fee from this purchase”. Yes we don’t!! But we will access your personal and private information, sell it to whomever we want and make even more money than Apple ever can from their measly 30%... 😁
Reply · Like · Mark as Spam

NoGoodNick - August 28, 2020 at 4:34pm
How is this NOT a clear example of corporate muzzling of free speech, pure and simple. They aren’t being punished for their legal contract with Apple, merely for publicly acknowledging it!
Reply · Like · Mark as Spam

1reader - August 28, 2020 at 3:45pm
This fights are good as it gets out things we would never known. Let them fight as they all portraying a company for people (they all “fight the injustice in our society “ for our wellbeing)... BS... just more money for them. They all grew in the pandemic a lot, when many people lost their health, jobs, etc
Reply · Like · Mark as Spam