Hydra 1.5 has been released to create high dynamic range images and it includes lots of new features. Two of the most important ones being: the improved image processing pipeline (RAW/OpenEXR/Tone Mapping) and Aperture integration (import/export/plugin).

Hydra gives human eye perception to your photographs by allowing you to create high dynamic range (HDR) images from a series of regular photographs, either from DSLRs or traditional point-and-shoot cameras. 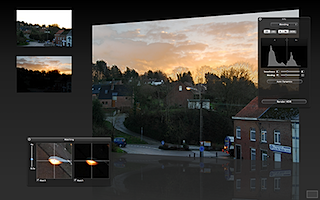 Improved Image Pipeline, RAW, DNG, OpenEXR Support
Hydra can import RAW file formats from most cameras (same as Aperture). A full list of supported cameras can be found there. If your camera is not supported, you can use Adobe DNG Converter, which will convert your images to the digital negative format that can then be imported into Hydra.

Aperture Support
Hydra talks with Aperture. You can directly import image from Aperture, or export to Aperture (and the same for iPhoto of course). But there's more. Hydra is now available as an Aperture PlugIn (Beta). You can now create HDR images right from within Aperture.
Follow iClarified
Add Comment
Would you like to be notified when someone replies or adds a new comment?
Yes (All Threads)
Yes (This Thread Only)
No
Comments
You must login or register to add a comment...
Add Comment
Recent