Apple has responded to an inquiry on the absence of Flash on the new MacBook Airs.

We're happy to continue to support Flash on the Mac, and the best way for users to always have the most up to date and secure version is to download it directly from Adobe.

Evans also told Engadget that this will be happening across all Macs in the future, though there may be some models still in the channel with Flash pre-installed.

Considering that Flash has been the source of many security problems and system crashes, forcing users to download the latest version may be a good thing.

Steve Jobs said this about Flash in a open letter posted on the topic.

"Symantec recently highlighted Flash for having one of the worst security records in 2009. We also know first hand that Flash is the number one reason Macs crash. We have been working with Adobe to fix these problems, but they have persisted for several years now. We don’t want to reduce the reliability and security of our iPhones, iPods and iPads by adding Flash."

Of course, it would have been possible to prompt users to update Flash; however, Apple has been making a strong push for the abandonment of Flash in favor of HTML5. 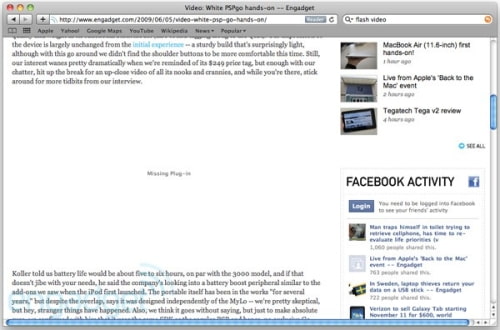