An upcoming release of iOS 4.3 will reportedly bring the Personal Hotspot feature to GSM iPhones.

The new mobile hotspot feature that ships with the Verizon iPhone lets your phone create a wireless network and share its Internet connection with up to five devices.

Currently the Verizon iPhone is running iOS 4.2.5; however, both iPhoneHellas and iPhoneclub.nl report that the feature will come to existing iPhones via an iOS 4.3 update.

The iPhone 4 CDMA, such as information from the American media, comes with iOS 4.2.5 but according to reliable information, the feature will be added to "our" iPhone 4 in the upcoming iOS 4.3. [iPhoneHellas]

No word yet on when this update may become available... 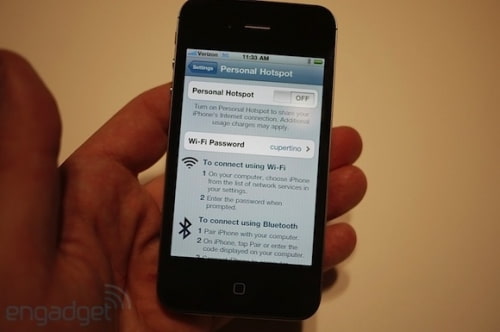 Nick - January 12, 2011 at 10:16am
CDMA is Verizon and GSM is AT&T. The Verizon iPhone is definitely coming out with Wi-Fi hotspot tethering for up to 5 devices, people are guessing that the 4.3 firmware will also enable it on all the other iPhones (which are GSM based on AT&T\'s network).
Reply · Like · Mark as Spam