Apple will allow you to run multiple copies of Mac OS X Lion on the same computer, reports MacRumors.

Previously the ability to do this has been available to Mac OS X Server only. The End User Licensing Agreement that is included with Mac OS X Lion GM Seed reveals that you are now permitted to run up to two additional instances of Lion on your computer.

From the 10.7 EULA:
(iii) to install, use and run up to two (2) additional copies or instances of the Apple Software within virtual operating system environments on each Mac Computer you own or control that is already running the Apple Software.

Users who are planning to do this will be happy to know that extra licenses are not required. 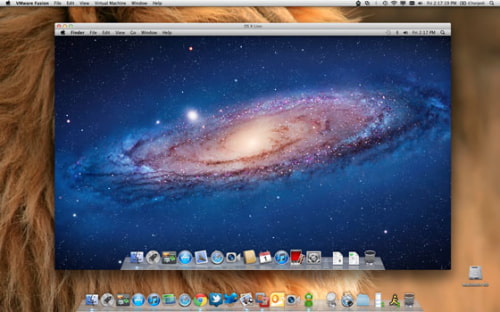 heeby - July 2, 2011 at 10:59pm
ok, have been thinking hard why... so imagine your watching some real hardcore porn, like the type that makes your cock throb so hard that your trousers are on the verge of ripping and wet because of your pre-ejaculate. Now imagine your mum/wife suddenly comes in, who knows an average amount about computers, and you don't want to lose the page you haven't saved. So you switch to the second operating system window and leave them completely unsuspecting. This would enable you to be scot free to jack off and shoot your load thereby concentrating your head full of endorphins. Now you just need Apple to invent the instant cock de-throbber as well...
Reply · Like · Mark as Spam

derrrr - July 2, 2011 at 11:29pm
We do it alot at work with windows 7. It makes a great test environment without running the risk of having to reinstall everything when you screw up and toast your OS in some way. Just roll back to a previous snapshot and try again... Great time saver
Reply · Like · Mark as Spam
Recent