The average iOS device owner is downloading 61% more apps and paying 14% more per app, according to a report issued Monday by Piper Jaffray's Gene Munster.

Fortune notes the highlights of his report:

● More apps: The average iOS device owner will download 83 apps in 2011 vs. 51 in 2010, a 61% increase year over year. "Smartphone users are showing an increasing appetite to use apps to add features to their phones," Munster writes, "and iOS has the leading app ecosystem."
● More expensive apps: The ASP (average selling price) per app is rebounding. ASPs are up 14% y/y in 2011 vs. an 18% decline in 2010. "After the initial race to the bottom in App Store pricing," says Munster, "we are seeing users pay up to add features and games to their iOS devices."
● More apps than Android: Apple's App Store has more than 425,000 apps. The Android Market has 200,000. In May, Google (GOOG) announced its 4.5 billionth app download, compared with Apple's 15 billion as of July 7.
● Plenty of free apps: 82% of the apps in Apple's store are free. The 18% that users have to pay for have an ASP of $1.44. According to Munster, the increase in ASP is driven by the more-expensive iPad apps that represent a growing percentage of app downloads.

Although the App Store does little to contribute to Apple's bottom line. It is essential in sustaining the Apple ecosystem and driving demand for its hardware devices. 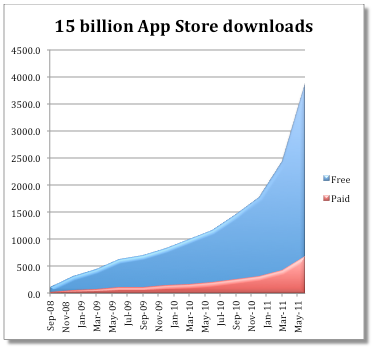 Michael iOS - July 11, 2011 at 6:07pm
That's because nobody could pirate apps on the iPad 2 without creating doo dadds in Xcode (to complicated for everyday Joe) now that appsync and installous are available to iPad 2 those numbers will go back to the norm. Thank god for pirates. Apple and ripoff devs here's to you! Stop blowing up the app store with junk and we (collectively) won't have to pirate apps. Keep it real you know who you are. I'm tired of all the hypocrites bashing pirates. Especially D7. We learned how to do it from you
Reply · Like · Mark as Spam
Recent