Apple has released the iPhone firmware 2.0.1 update for download via iTunes.

The current description of the new software states that it only provides "Bug fixes". Hopefully it will rectify some of the issues experienced with 2.0.

We will update you with further information once it becomes available. If you have pwned your iPhone please do not update until a working method is revealed.

Update: Had a chance to use the new 2.0.1 software on my 3G. I have to say, there is a really nice improvement in speed. My contacts don't take "30 seconds" to load and it isn't slow when trying to scroll through them as well. The push feature has been improved in that aspect. Also the load times seem faster for the programs. May just be us. Let us know in the comments! 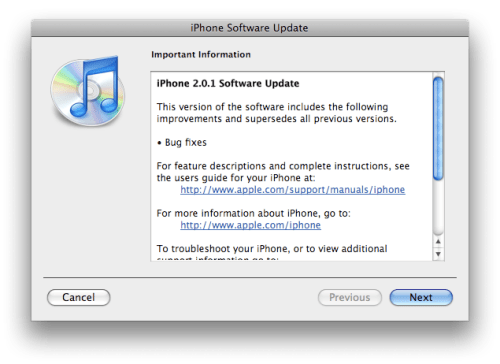 rohit - August 7, 2008 at 1:16pm
i got a iphone 2g its been unlocked and jailbroken using winpwn its now on firmware 2.0 can i do the update? could some1 please let me know if i can how do i do it just click update of itunes?
Reply · Like · Mark as Spam
0

Fred - August 6, 2008 at 12:22pm
This is off topic, but since a few folks have asked in here about it.. When following iClarified's tutorial on jailbreaking the 3G when you already have AT&T service, you need to make sure that the activate checkbox is UNCHECKED. I followed the iClarified tutorial to a tee and couldn't get any AT&T service. I re-did the process but unchecked that activate box, unchecked youtube fix, and checked Cydia. Worked like a charm.
Reply · Like · Mark as Spam
0

M6 TWL - August 5, 2008 at 10:09am
And btw - jailbreak can work on the new firmware, but sometimes it just wont find a carrier. I had this before and found that restoring through itunes helped sort it out, but thats not the case with everyone. Sometimes, it will just take 5 mins to find the carrier, so dont be too downhearted if it doesn't pop up straight away! Best thing to do though is wait for the new pwnage / winpwn tool...
Reply · Like · Mark as Spam
0

M6 TWL - August 5, 2008 at 10:06am
For 1st Gen iPhones, the baseband wont change - that will remain the same, so the unlock will still work. For the 3G iPhones, the baseband changes, which means that if DevTeam do release an unlock, it WILL NOT WORK with the 2.0.1 firmware... Jailbreak is reset on all iPhones when you upgrade to the 2.0.1, and you can't do anything about that yet, but the DevTeam have said they will release something soon which at least means you can jailbreak. So if you want an unlocked 3G, DONT UPGRADE THE FIRMWARE, or be prepared to wait a long time for an unlock... If you are on the original iPhone, it wont make a difference to the unlock - just the jailbreak. Hope that helps! :-)
Reply · Like · Mark as Spam
0