The 'Dream Team' of hackers have just released their untethered jailbreak for the iPhone 4S and the iPad 2.

P0sixninja details some of the background in a post on the Greenpoison blog:

The ridiculously complex combination of exploits-within-exploits that make this iOS jailbreak possible have consumed thousands of hours of brain-power & effort from a legion of world-renowned hackers, several of whom have been working diligently on this project since the dual-core A5 processor was unveiled by Apple last March. Ten months ago, I myself was live tweeting from a tediously long line at the nearest Apple retail store, where I anxiously waited to become one of the world's first owners (& hackers) of the newly-released iPad 2.

Despite new tools to help with finding exploits they realized a team effort was necessary.

We finally admitted that the escalated obstacles presented by Apple's new A5 processor would not likely be overcome by one individual or team – but all together, we should be more than able to conquer any challenges encountered. As such, a diverse group of iOS hackers all decided to set aside our personal goals & egos, relax our die-hard team loyalties, and pool our respective skill-sets, talents & exploits to form an iOS Super-Hacking "Dream Team."

The initial release is currently for Mac OS X only but Windows is coming soon! You can download it here.

For more updates you can follow us on Twitter, Facebook, RSS, or check out the new iClarified menu bar app and the new HTML 5 web app.

UPDATE: If the Absinthe webclip shows an error, Go to Settings, turn on VPN and wait.
(via @Planetbeing)

UPDATE 2:
The Windows version has been released! 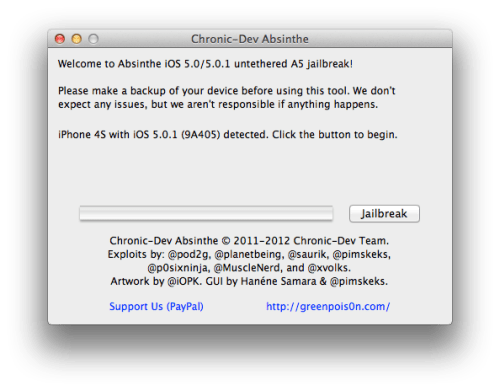 Tarkan - January 22, 2012 at 7:38pm
Do not install the new jailbreak for 4s it has unforseen bugs an stuffs up the iphone, wait for future updates. And cydia apps an tweaks not all work an further corrupt the iphone again. After jb install iphone screen shows ants an colorful messed up starup screen, safari doesn't work an so on.
Reply · Like · Mark as Spam

Soufiane - January 22, 2012 at 3:43pm
Can someone tell me why should I jailbreak? Looking for the pros here thank you :) (please don't talk about cool transistion or cool way to unlock...)
Reply · Like · Mark as Spam
102 More Comments
Recent