Pod2g has begun work on hacking the iPhone 4S baseband, according to tweets from the renowned hacker. Previously, pod2g had concentrated on jailbreak exploits.

As some have found, I am playing with the baseband. Already found a non exploitable DoS. I hope I can find more stuff.

His effort to hack the baseband is being performed from the network side (as opposed to the from within the iPhone) with help from a USRP N210 software radio.

Unfortunately, even if he is successful, any exploit found would need to be triggerable from the main app CPU side to be used in a software unlock.

The TippingPoint DVLabs Pwn2Own competition in September is offering $100,000 for a baseband exploit and pod2g may have his eyes set on that prize. 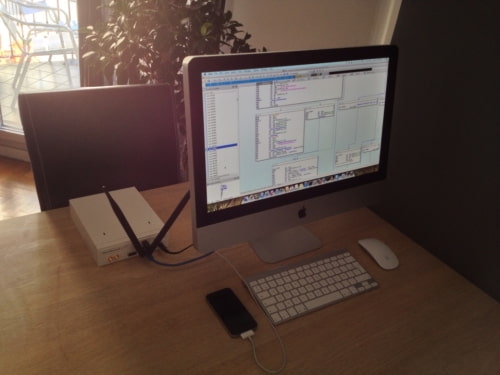 JuergenWest - August 11, 2012 at 9:02am
Isnt pod2g against unlocking? Or what other purpose does baseband hacking serve?
Reply · Like · Mark as Spam

JuergenWest - August 11, 2012 at 9:07am
Its never too late considering the latest software unlock for the iPhone 3G was only recently released and that phone was retired a couple years ago. Eg 6.15 to 5.13 baseband downgrade.
Reply · Like · Mark as Spam