Apple announced record Q4 revenue and profit during its earnings call earlier today. After all the earnings were reported, there was a Q&A session where Tim Cook talked about Surface, iPad Mini and more.

- iPod Touch accounts for more than half of iPods sold.
- iPod share is 70%+ of market, still top mp3 player in most countries.

- 58% year over year growth of iPhones, versus 35% for smartphone market over the quarter.
- Demand for iPhone 5 continues to outstrip supply.
- 9.1 million iPhones in channel inventory, up 800k from last week. Below target 4-6 weeks of iPhone channel inventory.
- Touting how Canon and Amtrak use the iPhone, as well as reporters from BBC, CTV and the Wall Street Journal.

- iPad sales were ahead of Apple's internal expectations. Strong year over year growth across all geographies.
- Talking about enterprise companies using iPad including Volkswagen (more than 30 internal iPad apps).

- Made a number of improvements to Maps in the past month, won't stop improving.

Tim Cook reiterated the company's iPhone 5 supply constraint as well..
Q: How are you thinking about supply ramp for the iPhone 5? How do challenges related to strong demand relate to past product launches?

A: Demand for iPhone is extremely robust. We're thrilled with what we see. We are in a significant state of backlog right now. In terms of production, our output has improved significantly since earlier this month and I'm pleased with the progress we've made there. I'm pleased with the current level of output. This is the largest volume ramp in our history.

As for Microsoft's Surface, Tim Cook felt the device was "confusing"
Q: How do you think about the Win8 and Surface tablets?

A: Haven't played with a Surface yet. What we're reading about it is that it's a fairly compromised, confusing product. One of the toughest things you do when making a product is to make hard tradeoffs. We've done that with the iPad and the user experience is incredible.

You could design a car that flies and floats, but I don't think it would do those things very well. People look at the iPad and competitive offerings, I think they conclude the iPad is the better choice.

A: For Q4 we sold 1.3 million Apple TV's, up more than 100% YoY. Sold more than 5 million Apple TV's during the fiscal year, more than double the previous year. Business doing very well, but looking at revenue of the business, it's quite small compared to the business as a whole. It's a beloved hobby though. We continue to pull the string to see where it takes us.

Finally, Tim Cook reiterated the company's idea that a 7" tablet just won't work.
Q: Can you talk about your pricing philosophy on the iPad Mini?

A: When we set out to build it, we didn't set out to build a small, cheap tablet. We set out to build a smaller iPad that offered the full iPad experience. The difference between us and the competition is profound. 35% larger screen than 7" tablets. 2 great cameras. Fastest communications with dual bank Wi-Fi. Fit and finish of our precision enclosure is breathtaking when held in your hands. That's what we've done, the iPad mini has higher costs and gross margin is significantly below our corporate average. Height of the cost curve, but we want to make a large number and we're going to work to try to get down the cost curve and get more efficient with manufacturing as we've done with our other products.

One of the things we try to do is to create a product that people will love for months and years and continue using. That's what iPad Mini is designed to do. You can see that more broadly on iPad by looking at the usage statistics. Over 90% of web traffic from tablets is from iPads. Apple will not make a product that somebody may feel good about for the moment, but then won't use when they get home. That's not the experience we want our customers to have. I would encourage you to use an iPad mini and I don't think you'd be using anything other than an iPad once you do that. 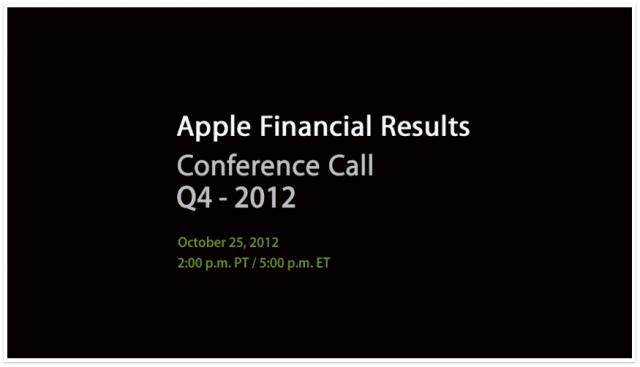