Apple users represent 58% of the world's loyalists and 56% of its devotees, according to a recent survey done by Forrester and relayed by FORTUNE.

According to the study 85% of worldwide computer users and 88% of U.S. users have little to no loyalty to a particular ecosystem. However, among those 12-15% that do show loyalty, Apple dominates. 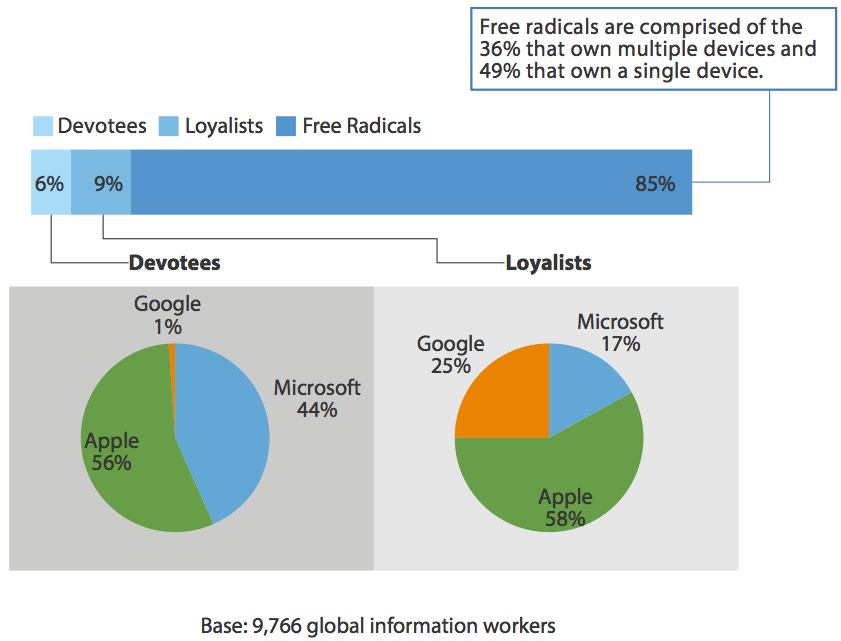 Kamel - May 19, 2013 at 3:20pm
It is not the device or even the company but the vision and roadmap the company creates and follows through. There will always be those that like this and hate that. It is part of life and things will really get really boaring if everyone liked the same thing. I am an Apple devotee for a number of reasons of which some will hate for the exact same reasons. Still the company got to the head of the pack and will relinquish the lead for some time before it takes the lead again and so on as in Microsoft, Google, and even Nokia! One device will not make me switch from Apple after 20 years with Microsoft. For me, I am in it for the journey!
Reply · Like · Mark as Spam

Deus3 - May 19, 2013 at 2:02am
I had all iPhones/iPads, but now I got the galaxy s4, that says something, Im not saying android is better system but at this moment samsung had a superior phone, android still need to improve though, even Saurik is coding for it, don't be a hatter just agree to disagree
Reply · Like · Mark as Spam

NoGoodNick - May 19, 2013 at 1:56am
I really wish you idiot paid Samsung hacks would STOP hijacking my good name to post your crap. If you're afraid to stand up for your own words, then pick a new name. Trying to make regulars sound like a-holes just shows you have NO credence here yourselves!
Reply · Like · Mark as Spam

JEWISH WOMAN - May 18, 2013 at 11:28pm
Attention Craig los angeles.... excuse me but you are new here and NoGoodNick has been coming here for yrs and we all like him so get your dam racist ass out of here
Reply · Like · Mark as Spam
24 More Comments
Recent