Hacker winocm has announced that he has a binary that will perform an untether of the iOS 6.1.3 jailbreak.

I now have a binary that untethers 6.1.3. Needs some more work though.

While a tethered jailbreak for iOS 6.1.3 is currently possible for users with the iPhone 4, iPhone 3GS, or iPod touch 4G, winocm has only confirmed that he has his code running on an iPhone 4:

I have my own code running inside the iOS 6.1.3 kernel on iPhone 4.

Notably, he says it's not useful for iOS 7.

It’s not useful on iOS 7. I don’t care about iOS 7. Other people are taking care of iOS 7. 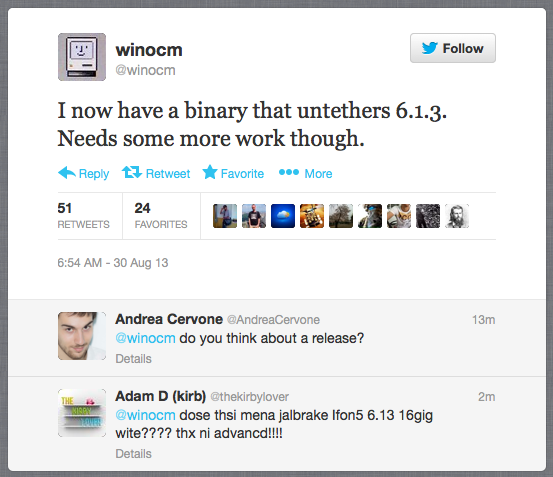 Jack - September 5, 2013 at 11:23am
Hello, I have tried to countless rimes to restore my iPod touch 4th gen to ios 6 from 6.1.3, it gets stuck at either waiting for reboot or it doesn't quite finish the exploit anyone know how I can fix this issue?
Reply · Like · Mark as Spam

rafeeq - September 5, 2013 at 11:46am
i try to install jail break but could not.then my iphone4s quite all program.only apple mark appear.how can i re boot. thanks
Reply · Like · Mark as Spam

aniabitt - September 4, 2013 at 5:46pm
If anyone has trouble unlocking AT&T phones, because AT&T doesn't allow your phone to be unlocked when the contract is not over, you can check out attiphoneunlocking, it's a really good site for unlocking
Reply · Like · Mark as Spam