The touchscreen found in the iPad mini is faster than any other iOS, Android or Windows tablet, according to a report from Agawi.

The company previously performed its TouchMarks benchmark test on smartphones, determining that the iPhone 5 responded to touches at an average time of 55 milliseconds. The closest Android device was the Samsung Galaxy S4 at 114 milliseconds.

This time Agawi pitted top tablets against one another and found that the iPad mini has the fastest touch screen at 75ms, followed by the iPad 4 at 81ms.

Nvidia’s SHIELD performed much better (though strangely with much higher variance) than the other Android devices, suggesting that Nvidia went through special effort to optimize the responsiveness of the device. It’ll be interesting to see whether the improvement carries over to other, non-Nvidia Tegra 4-based devices. Amazon’s Kindle Fire HD was a surprising leader in the Android section, especially given that it’s $90+ cheaper than the other two Android tablets. This could be a result of Amazon’s willingness to sell expensive hardware at a loss. Finally, Microsoft’s Surface RT also performed much better than we expected, especially given that Nokia’s Lumia also running Windows didn’t fare significantly better than Android devices in our smartphone comparison.

The Samsung Galaxy Tab 3 came in last with a score of 168ms. Take a look at the chart below or hit the link for the full report. 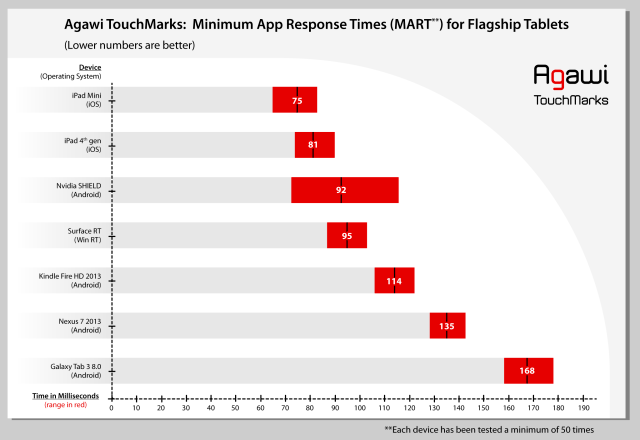 Jimmy Nutrin - October 10, 2013 at 12:41pm
Obviously, why do you think window 8 is shit and android still isn't even close in many ways to beat iPad, like iPhone, iPad did so much for me!
Reply · Like · Mark as Spam

ratGT - October 10, 2013 at 10:42am
Quite honestly, I've always felt that something was wrong with all Android device's touch responsiveness (among other failures) and every time I was returning to an iPhone, it felt like home. And yes, besides iPhones and iPads, I've owned all flagship Androids, up to HTC One. Before that I had Samsung Galaxy SIII 4G with 2GB RAM.
Reply · Like · Mark as Spam
7 More Comments
Recent