Samsung is reportedly planning to release a Galaxy smartphone with a three-sided display that wraps around the edges of the device, reports Bloomberg. The display would allow messages to be read from an angle.

The phone will use an upgraded version of Samsung’s technology called Youm, currently featured in the curved Galaxy Round handset, the people said, asking not to be identified because the plans haven’t been released. The display may be used in the S or Note series of premium handsets or may be the first in a new line, the people said. Samsung plans to have each side of the display operate independently.

Notably, SEL has developed flexibile, high definition CAAC-OS displays that can curve around the edges of your phone. The company recently demonstrated their displays noting that, "A display that can be bent into a diameter of 4 mm is probably unparalleled worldwide. In particular, this is the only technology that can display a picture on bent edges." 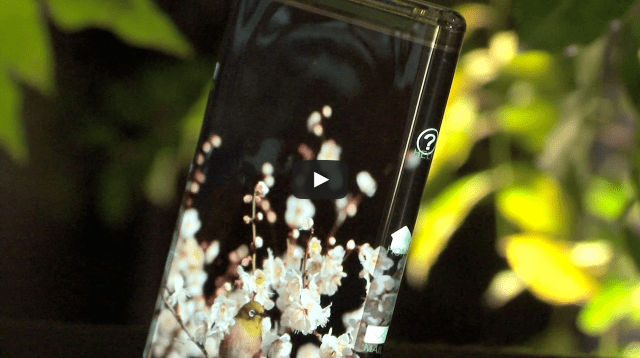 No Troll Please - November 17, 2013 at 7:03pm
Samsung has different business - not just phones. This is just a display of their progress in manufacturing display screen. Now it is up to other companies to get all the right parts and make something creative out of it. Of course Apple is the king of that.
Reply · Like · Mark as Spam
0

Fukran John - November 16, 2013 at 4:04pm
lol. Now apple has something to copy. They have copied already everything available in the market and they were waiting for something new to come up. Now they will announce iPhone 7 with this technology .
Reply · Like · Mark as Spam
0

Fukjohn Rah - November 16, 2013 at 4:56pm
Now you will be more desperate than you sound! Apple is keeping the 4" screen but they'll make a bigger phone like everyone else did just to get picky big screen beggers what they want for a phone, but lg copied samsuck after they released curved screen but would apple really copy this useless idea for whoever is that interested in this?
Reply · Like · Mark as Spam
0

NightDvil - November 16, 2013 at 3:15am
useless means that no cover will fit on it perfectly and dont even think on letting your phone fall from anywhere big fail
Reply · Like · Mark as Spam
0