The iOS 7 adoption rate keeps climbing and this time, and according to Apple's App Store numbers 82% of mobile devices are using iOS 7. The previous number Apple had given out was 80% -- so the rate has jumped 2% in just a couple weeks.

These numbers come straight from Apple's own developer support page, which gives information on App Store review times, percentage of users using a particular iOS version, and much.

The data was measured through a 7‑day rolling period ending February 9, 2014. 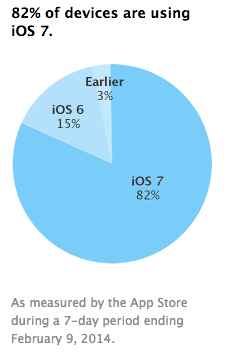 loweradopt - February 12, 2014 at 11:35pm
and they can thank the jailbreak community. Without the jailbreak release this would have a lower adoption.
Reply · Like · Mark as Spam
0

thevmaxer - February 13, 2014 at 3:39am
+1 ... Had I known that I was going to lose the ability to change my icons from a free form with no frame, to the cartoonish k-mart style now available, I would have stayed with IOS 6 even though IOS 7 is quite a bit faster at processing.
Reply · Like · Mark as Spam
0