AT&T is considering cutting the price of its monthly iPhone service package or offering a range of lower-priced plans, according to a BusinessWeek report.

One plan that could be introduced as early as late May would include limited data access at a $10 monthly reduction, the people say. The possible price cut likely reflects the back-and-forth between AT&T and Apple as they work out whether and under what terms AT&T would remain the sole U.S. iPhone carrier.

The BusinessWeek report corroborates an earlier report by TheStreet which wrote There is a "strong possibility" that AT&T will drop the entry-level price to $59 from $69, says Cote Collaborative analyst Michael Cote, an industry pricing strategist. The announcement, he said, will probably accompany the launch of the new iPhone on June 8, during Apple's World Wide Developers Conference. 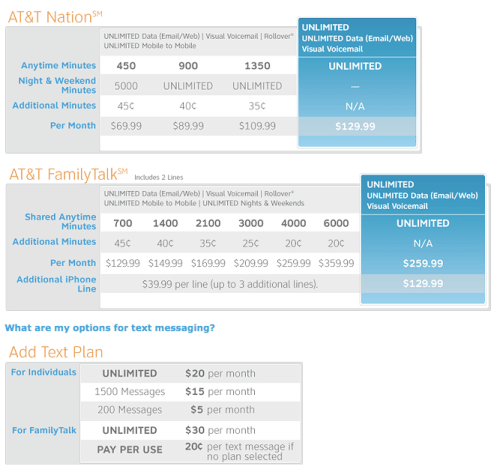 Ramses - May 18, 2009 at 1:56pm
this really shows what morons are they. not only they should actually repay to loyal customers but they have no idea what new plan to introduce. But ok ... the more stupid ATT the more more money for Rebel, Gever and other opeartors. Last time I called their customer services some obnoxious obviously fat woman answered that barely spoke language yet had nerve to tell me she does not understand me. With moronish companies like ATT I really not surprised US economy went into recession.
Reply · Like · Mark as Spam
0

Nick - May 18, 2009 at 2:09pm
I've had nothing but pleasant experiences with AT&T and have spoke with all American and easy to understand people. The economy didn't go into recession by bad customer service, it went into recession because people spent beyond their means. The government made it so that anybody, even a 5 year old, could purchase a house, and lets not forget to mention fannie mae and freddie mac, they were a major cause of this too. Just because you don't like a company and the company maybe isn't run the way you want them to be, doesn't mean every company in the US is the same and is the cause of the recession.
Reply · Like · Mark as Spam
0

Ramses - May 18, 2009 at 2:16pm
very good maybe instead of making plan that actually work for customers you can stuff in more stories like this during lunch break. With morons at management that might even keep you working at ATT longer or at least you get a deal in June
Reply · Like · Mark as Spam
0

Nick - May 18, 2009 at 2:21pm
I don't work for AT&T. I had Verizon for 8 years and the only reason I switched to AT&T was for the iPhone. Since I've switched I've only had a couple problems which all revolved around 3G. As far as the plan goes, I think the pricing is too high and I'll be very happy if they switch it back down. The main point though, is that they aren't forcing you to go out and get their service, it's your choice. I know a ton of people that would love to get the iPhone, but they don't want to leave Verizon, its personal choice that keeps them there. If you don't like AT&T that much, maybe you should look into unlocking your iPhone and moving to a different carrier.
Reply · Like · Mark as Spam
0

Eric - May 18, 2009 at 2:29pm
ok, now your just being RUDE! i mean, he's right, it wasn't bad customer service at all that did this to America! if that were the case i'm sure AT&T would have been one of the first to close it's doors! while i DO have complaints with AT&T it is MY choice to stay with the company, no one forces me to do that, it's my decision! All he was doing was stating facts that you apparently had mixed up! don't be so rude, that's what's wrong with all these forums today!
Reply · Like · Mark as Spam
21 More Comments
Recent