John Maisey has announced the Rekease of Dates to iCal 2.1, a major update to his replacement for Apple's iCal birthday calendar that has a range of features that has made it indispensable for many iCal and Address Book and iPhone users.

As well as automatically syncing birthday dates from Address Book, Dates to iCal 2 can sync anniversary and custom dates. It can add up to five alarms for each birthday in iCal and the same number for anniversaries. It gives the option of only syncing from one Address Book group. This application also allows for the titles of the events sent to iCal to be modified to the user's preference, including the age of the event.

The latest version of Dates to iCal has many improvements including; Allowing for separate iCal calendars for birthdays and anniversary events so these can be synced to other devices seperately. Syncing is now much faster than previous versions. Sub-groups now sync from Address Book as wel as the top level group linked.

Dates to iCal 2 is shareware, registration is £3 per machine. After a three week demo period it will prompt to be registered. It requires OSX 10.5 with iCal and Address Book. 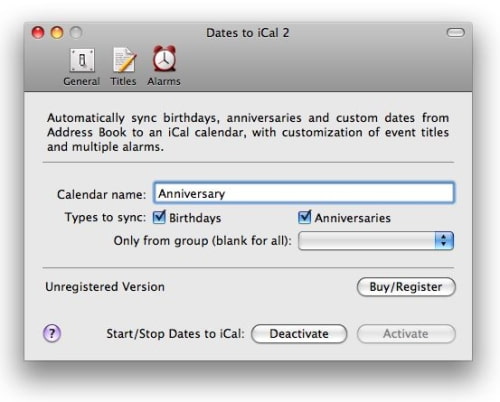