The company generated 52.73 trillion won in revenue in Q4 and profits of 5.29 trillion won ($4.84 billion). That's down from 59.28 trillion and 8.31 trillion won in Q4 2013. Earnings for its mobile division declined for the fifth consecutive quarter due to increased competition from Apple and other smartphone manufacturers such as Xiaomi.

One highlight from Samsung's earnings was the performance of its semiconductor division. Its profit was 2.7 trillion won, the highest its been in over four years. The latest rumors have the company making 75% of A9 chips for future Apple devices.

Samsung says that looking ahead to 2015, earnings for components are expected to be static, due to slow seasonality across the IT industry. During this time, the company plans to focus on ramping up the volume of the System LSI Business’ 14-nanometer process, while also focusing on improving the Display Panel segment’s premium product offerings.

In regards to its ailing mobile business, Samsung says it will "focus on recovery by differentiating its mobile devices using new materials and designs, while also more efficiently managing costs through, among others, streamlining product line-ups." Recent reports have suggested that Samsung might try to differentiate itself with technology that is difficult for its competitors to replicate such as flexible displays and edge displays.

Samsung's profits pale compared to Apple's which set a new record. The company posted quarterly revenue of $74.6 billion and record quarterly net profit of $18 billion, or $3.06 per diluted share. 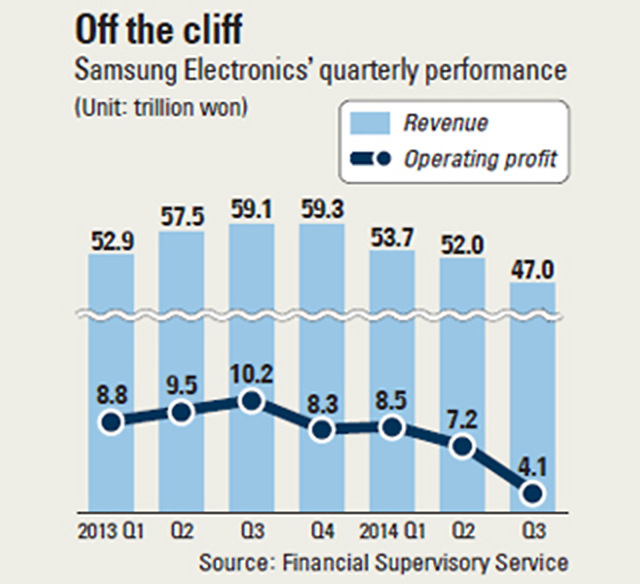 sWorshipper - February 17, 2015 at 11:20am
And guess how that works out, making loop pay, yet another Apple idea copied. That's their strategy, if they can't beat them, mock them and sometimes copy them.
Reply · Like · Mark as Spam

Pretender - January 30, 2015 at 10:23pm
Samsung has one problem that they don't sell their smartphones like Apple does , in store and unlocked and ssmiling face. Then again they don't need to cause iphones designed and produced by samsung!?
Reply · Like · Mark as Spam

Ren - January 30, 2015 at 10:26pm
There is one in best buy, what they can't get right is actually coming up with new things other than dragging the same old shit that worked the same on Apple devices. The only marketing Galaxy ever focused on that mattered was big touch screeen, now they just follow Apple in which most their profits go to them and paid damages in lawsuits.
Reply · Like · Mark as Spam

asdad - January 30, 2015 at 4:06pm
That's expected since there are alot of other Android devices out there that either are cheaper or have more quality/hardware features than theirs.... Like in some places Asus Zen Android phones are selling pretty well.... But what if all android based products are combined as a whole?
Reply · Like · Mark as Spam