SuperSync has released SuperSync 3.3, a major update to their popular iTunes library manager for Macs, PCs, and iPods. Combining power with simplicity, SuperSync lets anyone visually compare, merge, and access their media files and playlists from anywhere. Merge individual tracks, playlists or entire libraries with a few clicks of the mouse.

SuperSync makes it easy to create a master media library and have a subset on computers and laptops around the house. Any new content that is added on one computer can be instantly uploaded to the master library. SuperSync can help reduce the likelihood that two family members will accidentally buy the same Apple Store download.

Use SuperSync to:
* Keep track of all music across multiple computers - Mac OS X, Windows, and iPod
* Compare and merge any two music libraries
* Move music, videos, and playlists from one iTunes library to another
* Export all or a subset of a library as a well-organized directory of tracks
* Find partial albums, duplicates, missing tracks, corrupt files, and other common music library problems
* Intelligently import media from a hard drive, iPod, or network drive without duplicates
* Easily move a music library from Windows to Mac, Mac to Windows, or any combination
* Access a home music library from anywhere - upload/download songs, movies, and playlists
* Share a common library with multiple iTunes users on a network drive
* Access MP3's and playlists from Tivo

SuperSync 3.3 celebrates its 3rd birthday as the most feature-packed music library synchronization application for Mac and Windows iTunes/iPod users. This release has been designed for Snow Leopard. SuperSync has been tested extensively with Windows 7, as well as Vista, XP and earlier versions.

Version 3.3 improves upon its meta data synchronization interface. This feature lets users update tracks that have modified tags and ratings information across multiple libraries (such as album, artist, genre, track number, rating, etc.). For example, where a set of tracks in a library is updated to correct a misspelled artist name or track numbers are added. SuperSync makes it easy to propagate these changes in a track's "meta-data" to other places where the track is saved in a library.

With iTunes 9.0, Apple has added basic "Home Sharing" to their iTunes product. This feature is limited to 5 computers and offers only one-way synchronizing, with no ability to easily see what tracks are in which library. If iTunes "Home Sharing" sounds good, SuperSync is worth checking out. SuperSync lets you easily compare any two music libraries - around the home or over the internet. Tracks that are in both libraries are colored green. Tracks in the local library only are gray, and tracks in the "remote" library are blue. Tracks can be copied to or from either library, turning tracks green in the process.

SuperSync also includes a basic web interface for listening to a home library while on the road. An iPhone web interface is also included for playing music tracks. SuperSync 3.3 adds a new "Quick Connect" feature for iPods that allow viewing and importing tracks from an iPod onto any Mac or PC running SuperSync.

Pricing and Availability:
This update is free to all registered users. The full registered version is available for $29.00 (USD) for 2-pak, $39.00 for 5-pak, or a best value $49.00 10-pak. Licenses can be used for any machine (Mac OS-X or Windows) that music is stored on. A separate license is not required for iPods or to import music from a disc or hard drive. 5- and 10-pak licenses can be split among two or more people to keep the cost-per-license down. A demo version is available to try most of the features for a limited number of file transfers. One license is recommended for each computer you keep music on. 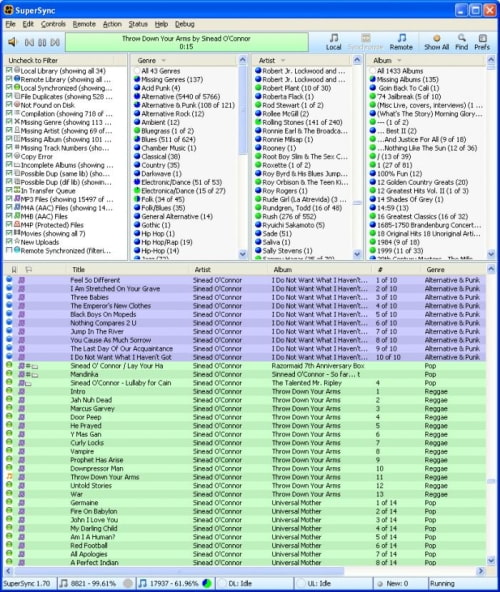