Google Play saw a huge increase in downloads in 2015 thanks to first-time device owners in emerging markets, reports App Annie. However, Apple's App Store continues to dominate in revenue generated.

In last year’s Retrospective, we noted a 60% download lead of Google Play over iOS. This widened to nearly 100% in 2015. This massive disparity could mark the beginning of major changes in mobile marketing, including substantial increases of Android’s share of mobile ad spend. Google Play’s significant increase in worldwide downloads came largely from emerging markets (a fact that we noted in our Q1 2015 and Q3 2015 Market Index reports); the top five contributors were Brazil, India, Indonesia, Turkey and Mexico. Together, these countries accounted for nearly half of Google Play’s year-on-year download growth.

Both stores had significant gains in revenue; however, iOS continues to outpace Google Play. The App Store saw strong revenue growth driven by China, the United States, and Japan, which contributed nearly 90% of the App Store's year-on-year growth.

China saw especially impressive growth in App Store revenue, a fact that Apple called out in its Q4 earnings call. The relative contributions of games and apps did not deviate from their 2014 levels; games continued to contribute 90% of revenue on Google Play and 75% on the iOS App Store.

App Annie believes there is still plenty of room for growth in the app economy. Device penetration is low in emerging markets and revenue will continue to grow as the audience gets bigger and various monetization options gain further traction.

Check out the charts below... 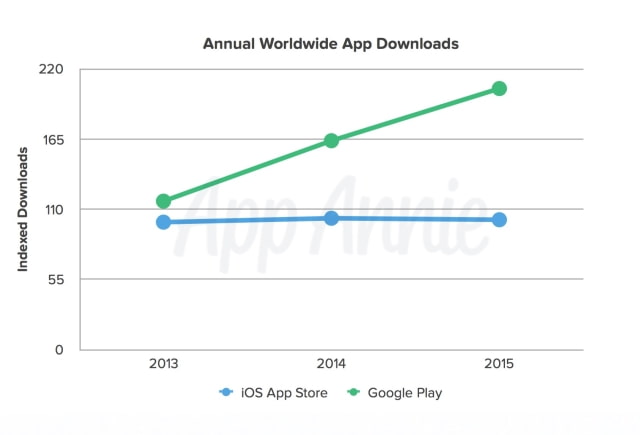 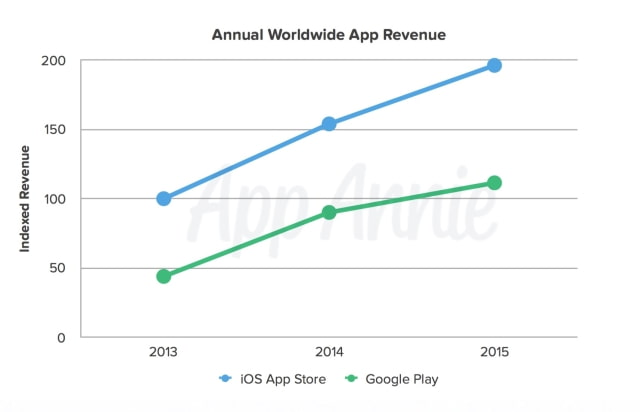 Chris - January 21, 2016 at 2:13pm
The only reason the Android user base is growing is because of people in undeveloped countries. They're not going to be buying apps if they don't have money.
Reply · Like · Mark as Spam

@&/:*%#! - January 21, 2016 at 4:00am
The numbers of Android apps doubled because of the fake, malicious apps that got in. And besides Android apps are mostly crappy and rip-offs of iOS apps because they can't have full support of the best app developers. I remember when Adobe Apps was first released in Android but failed because nobody uses them. I was envious at them because they didn't released Adobe photoshop App for the iPad at that time, but when Adobe switched to support iOS first then they got serious now. All new Adobe apps are first launched in iOS and years after Fandroids drool for the cool apps then they release them on Android. As you see quality beats quantity. And besides you like your phone because of the contents and the hardware just comes next.
Reply · Like · Mark as Spam

Mik Cole - January 20, 2016 at 10:12pm
What do you expect when Apple owners only know how to pay pay pay for what they get. Entitled people have entitled phones.
Reply · Like · Mark as Spam

Axwell - January 20, 2016 at 7:27pm
What do you expect when the main contributors are poor countries. Poor people have poor people phones (Android).
Reply · Like · Mark as Spam
Recent