Haimawan and its subsidiary Jijia today announced the official launch of MESUIT, a case that lets you run Android OS on the iPhone.

MESUIT is the world's first and only one smart hardware that runs Android OS on iPhones in the form of an app and supports one-key hot swapping. Users can have both iOS and Android OS run simultaneously on one device. It leverages on home device's dual-SIM, dual-standby features to offer users with simultaneous access to all functionalities of the two types of smartphones. The use of one device also greatly reduces the issues associated with having two smartphones. 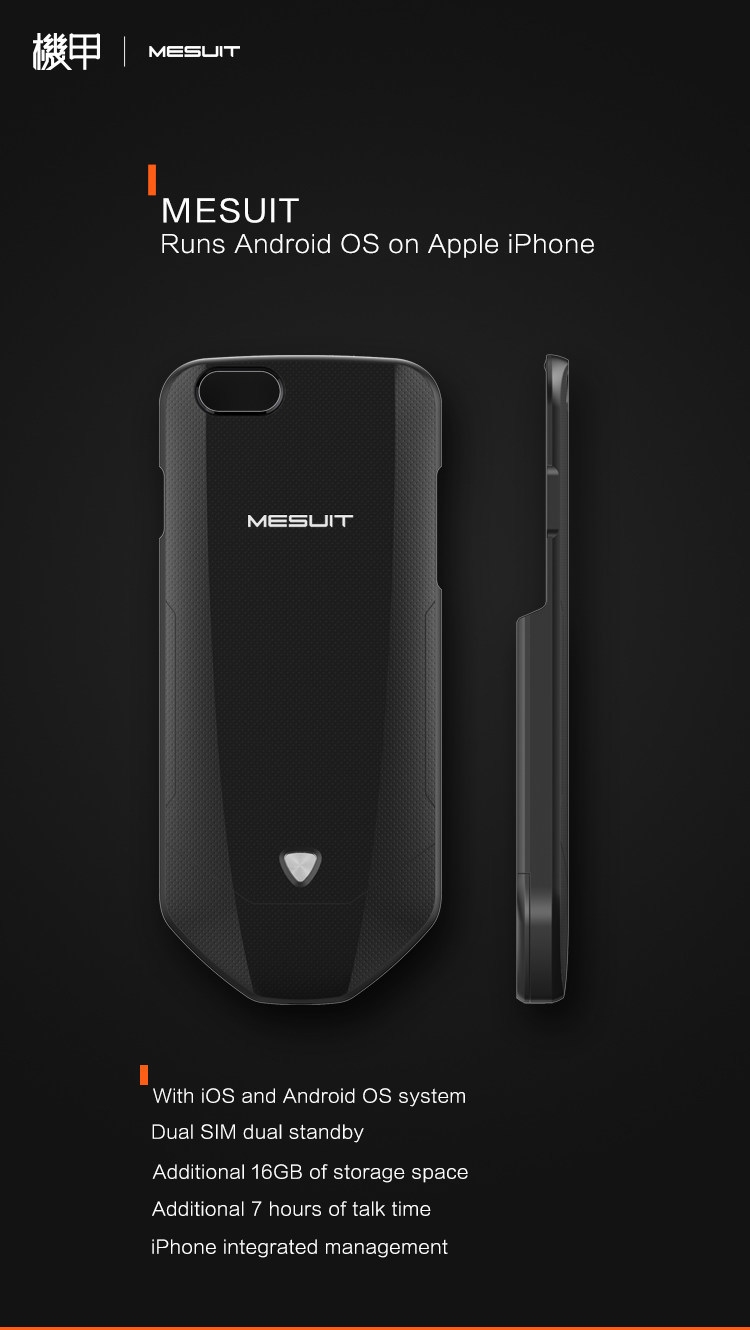 MESUIT also provides an additional 16GB of storage space for iPhones as well as the ability to transfer photos and videos into MESUIT with a simple tap, freeing up space on the iPhone.

MESUIT is currently compatible with the Apple iPhone 6, iPhone 6S, iPhone 6 Plus, and iPhone 6S Plus. It is connected via the lightning port and operates via an app. The app can achieve a vast majority of iTunes functionality and allows for various management functions, including ring tones, local backup, file processing, etc.

Take a look at the video below...

DeezyGee - July 24, 2016 at 2:10pm
You know that App that let's you hook up an iPad to a Mac, and use the iPad as a monitor for your Mac? Everyone with common sense understands that you are not actually running OS X on the iPad, just using it as a display. That's all this product does. IT DOES NOT RUN ANDROID ON THE IPHONE, PERIOD.
Reply · Like · Mark as Spam

Undersnail - July 24, 2016 at 1:18am
But the question remains. Can the same apps on different OS' share the data stored into them like angry birds app data for example? Wouldn't that mean that OS' can transfer and maybe cen copy data. Sounds crazy, but what if it does work out like this?
Reply · Like · Mark as Spam

iOS - July 23, 2016 at 8:42am
Don't get me wrong, but the only reason I have a iPhone is to FaceTime. Btw this android version looks ugly. And you can't run android on a phone which has less than 3gb ram, so if you like to have both, get a proper phone.
Reply · Like · Mark as Spam