A replacement Samsung Galaxy Note 7 caught fire on Southwest Airlines flight 944 from Louisville to Baltimore this morning while the plane was still at the gate, reports The Verge. All passengers and crew were evacuated from the plane and no injuries were reported.

The incident is especially troublesome because the phone was a replacement device following Samsung's recall of the Note 7 due to an exploding battery.

The Verge spoke to Brian Green, owner of the Note 7, on the phone earlier today and he confirmed that he had picked up the new phone at an AT&T store on September 21st. A photograph of the box shows the black square symbol that indicates a replacement Note 7 and Green said it had a green battery icon.

Green powered down his phone as requested by the flight crew and put it away in his pocket. When he noticed the phone was smoking he dropped it on the ground. A “thick grey-green angry smoke” was pouring out of the smartphone.

When a colleague returned to the plane to gather some belongings the phone had burned through the carpet and scorched the subfloor of the plane.

Green says the Note 7 was charged to about 80% and he had only used a wireless charger since getting the device.

Currently, the phone is being looked at by the Louisville Fire Department arson unit. Samsung has yet to comment about the incident. 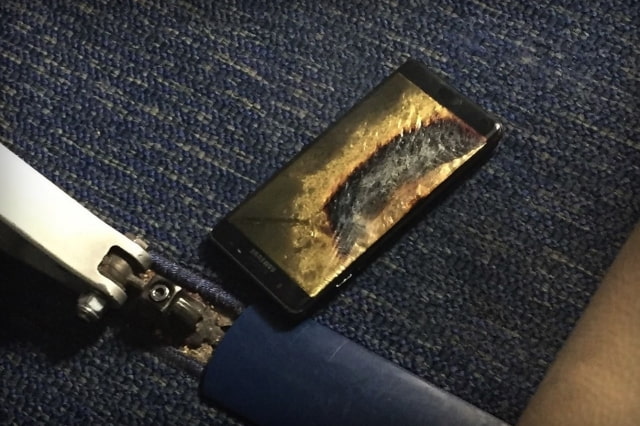 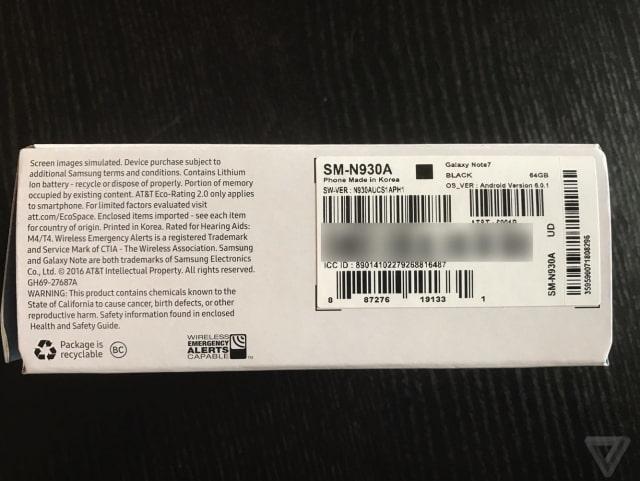 Fake - October 7, 2016 at 8:25am
Really? Look at the included pics for the article. Totally bogus. The floor of the plane is in perfect condition. Someone just laid an old, burnt phone on the floor and took a pic. So obvious and fake.
Reply · Like · Mark as Spam

heArt - October 6, 2016 at 9:33pm
I'm an Apple fanboy to, but the shitty marketing companies plan against Apple is one thing to keep me away (and never see a company the same way ever again), but what really kept me away with how much of a mess android was when I first used it and how I thought Windows before 8 was okay until I used it without antivirus a few times no matter how much I tried to bring myself to come back, but years later living with iOS (and OS X, but that's beside the point) since then, I knew more about it that made me understand the difference between every IOS release that is not the same in any way, but I knew more about the endless possibilities thanks to jailbreaks and how secure it is (for those who want to stay limited, it's worth it). As for the iPhone, it never fails to impress and continue to bring in new stuff
Reply · Like · Mark as Spam

Art - October 6, 2016 at 10:55am
Man the sound of an Apple fan boy. I was once an Apple Fanboy but I gave up. I purchased the Note 7 and never looked back. Don't get me wrong I still have my MacBook and iPads but the iPhone just got old. iOS 6 to iOS 10 same exact OS. Anyways back to topic. It is sad that this is happing but it's not going to keep me way from using my note 7. The original one I had never had a problem. Then I had it replaced by Best Buy and same thing no problem with overheating or the battery dying fast. Overall I have had abreast experience with my Note 7 and Samsung CS. I love how I can call or FaceTime them directly from my phone and there is always someone there in less the 10sec to answer that call. Plenty of iPhones, iPads and MacBooks catch fire it's just Samsung in the spotlight. Give it a tray , android wound bite.
Reply · Like · Mark as Spam

D4xM4Nx - October 6, 2016 at 4:14am
Just wow... It WAS a replacement device. QC on Samsung's end is a joke and they don't even care about customers, let alone safety. This is much worse than all #Gates put together. Let's hope all class action lawsuits against them from affected users teach an exemplar lesson about what priorities truly are. So long, Samsung mobile...
Reply · Like · Mark as Spam
27 More Comments
Recent