The upgrade to iOS 10.3 will bring a change to the iPhone's file system updating it from HFS+ to APFS, according to the release notes for iOS 10.3 beta 1.

File System Conversion
When you update to iOS 10.3, your iOS device will update its file system to Apple File System (APFS). This conversion preserves existing data on your device. However, as with any software update, it is recommended that you create a backup of your device before updating.

The upgrade to APFS is said to bring significant speed improvements and early testers of iOS 10.3 are already noticing the difference. 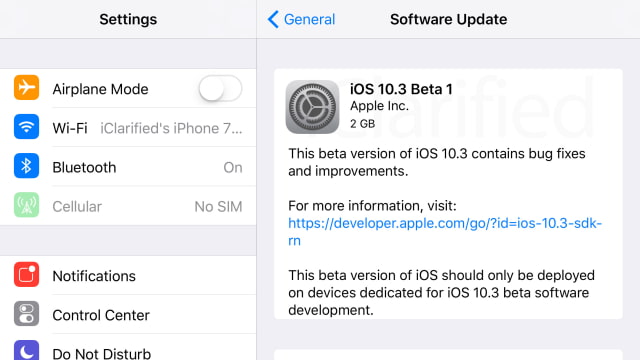 RedCommieBastard - January 25, 2017 at 6:43am
Its curious that everyone seems concerned about jailbreaking. HFS is as ancient as the Macintosh itself and its roots go all the way back to 1985. Its an ancient filesystem in desperate need of replacement. APFS is desperately needed. I/O performance in macOS is noticeably worse on the same hardware as Linux, due almost entirely to the anemic performance of HFS. APFS is thoroughly modern and exciting.
Reply · Like · Mark as Spam

JB - January 24, 2017 at 9:37pm
Just more ways to block jailbreaks, and access to the device form companies that try access the device with court orders propbaly
Reply · Like · Mark as Spam

JB - January 24, 2017 at 9:36pm
Jail breaking is the future , APLe stole many of new features the idea of jailbreak communities for YEARS. They give credit to themselves they are liers.
Reply · Like · Mark as Spam
10 More Comments
Recent