Jonathan Levin has released LiberTV, a jailbreak for the Apple TV 4 and tvOS based on yalu by Luca Todesco.

The jailbreak works on tvOS 9.1 through 10.1 but does not work on tvOS 10.1.1. It provides a full set of kernel patches which allow running unsigned code and injecting arbitrary libraries into any tvOS process.

There is no Cydia. The 64-bit version of Mobile Substrate should work but was not included. Saurik could release Cydia for tvOS at some point but no word on whether that will happen yet.

Similar to yalu, the jailbreak comes in the form of an IPA that needs to be signed. It is semi-tethered. The IPA includes a modified 64-bit only bootstrap.tar, containing /bin/sh -> /bin/bash, some tools (in /usr/local/bin), dropbear (a free standing ssh daemon, with its keys in /etc/dropbear), and a few select binaries.

Levin repeatedly warns that after jailbreak you should take great care not to overwrite any system binaries as you could brick your device.

We'll be posting instructions on how to jailbreak shortly. A FAQ can be found here. Please follow iClarified on Twitter, Facebook, Google+, or RSS for updates. 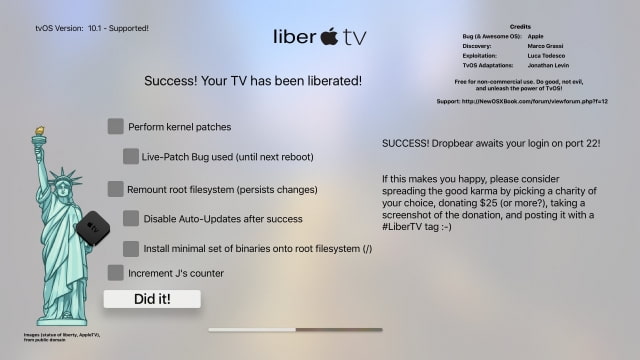 Elbori73 - March 4, 2017 at 12:22am
I don't understand why people are so ungrateful and only look at the negative side of things. If we don't have a jailbreak you complaint about it and if we get one is not good enough. I'm going to leave it at that
Reply · Like · Mark as Spam

D4xM4Nx - March 4, 2017 at 7:54am
Anonymity empowers them to be aggressive and entitled to expect the world moving around themselves... It'll be great to, say, install Kodi while having support for Airplay or compatible apps, hope this jailbreak reaches a fully useful tool Cydia support.
Reply · Like · Mark as Spam