Mozilla has announced the release of Firefox 54, a new version of the web browser which finally uses multiple processes.

The old Firefox used a single process to run all the tabs in a browser. Modern browsers split the load into several independent processes. We named our project to split Firefox into multiple processes ‘Electrolysis ’ (or E10s) after the chemical process that divides water into its core elements. E10s is the largest change to Firefox code in our history. And today we’re launching our next big phase of the E10s initiative.

Firefox 54 uses up to four processes by default, helping the browser run faster and crash less. Mozilla believes the use of four processes strikes the 'just right' balance between speed and memory usage. Advanced users may want to increase the number of content processes. This will use additional memory but make Firefox faster. You can adjust the number using the dom.ipc.processCount setting in about:config.

Mozilla says its testing has found that Firefox used significantly less RAM than other browsers on Windows 10, macOS, and Linux. See the chart below for more details. 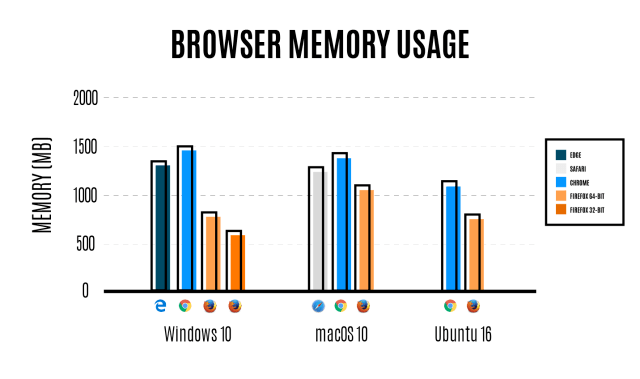 D4xM4Nx - June 15, 2017 at 7:37am
Oh man.. Firefox needs a massive rebuild work to perform MUCH better than it does currently, something tells me this is far from being that solution, which is sad cuz I like it.
Reply · Like · Mark as Spam