Testing by Cellular Insights for PCMag has found that the Qualcomm-powered iPhone X still has better LTE performance than the Intel model. Apple's AT&T and T-Mobile models use modems from Intel while Verizon and Sprint models use Qualcomm modems.

Cellular Insights looked at performance on LTE Band 4, which is used by every major US carrier except Sprint, as well as in Canada and parts of Latin America. The company attenuated an LTE signal down from -85dBm. Both modems did well with a strong signal reaching speeds of 195 Mbps; however, Qualcomm gained an advantage quickly as Intel dropped to 169Mbps at -87dBm. Qualcomm's modem reached that speed at -93dBm.

Most consumers will feel the difference in very weak signal conditions, where every dBm of signal matters, so we zoomed in on that in the chart below. At very weak signal strength, below -120dBm, the Qualcomm modem got speeds on average 67 percent faster than the Intel modem. The Intel modem finally died at -129dBm and the Qualcomm modem died at -130dBm, so we didn't find a lot of difference in when the modems finally gave out.

When compared to last year's tests, Intel has made improvements. PCMag notes a considerably smaller difference between the two.

Check out the charts below and hit the link to see how performance compares with last year. If you want to get the Qualcomm modem iPhone X, Apple is now selling it unlocked and unactivated. 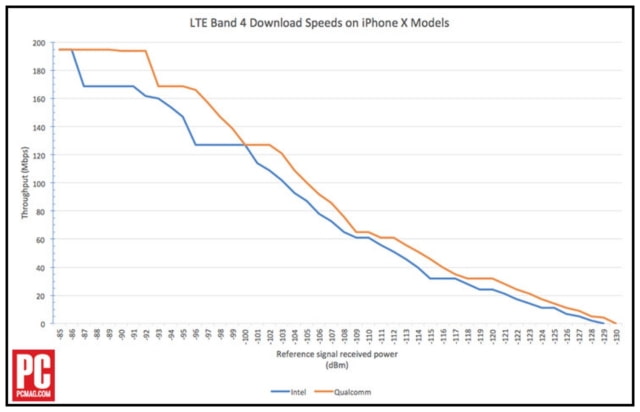 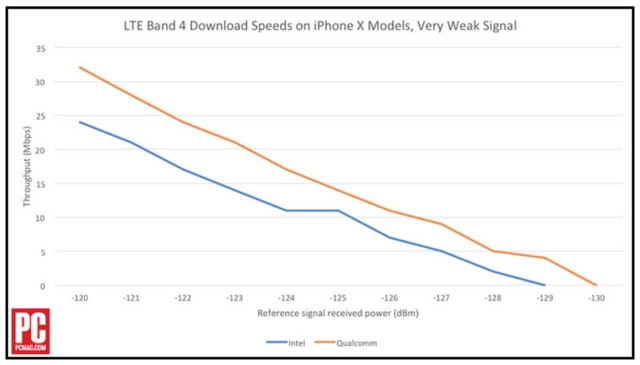 Larry - December 2, 2017 at 9:26am
Bad times for customers if companies rather go for battle than for common sense and common interests.... What a waste of money, resources and quality... @Apple & Qualcomm: this is neither money first nor customer first... not even best product first!
Reply · Like · Mark as Spam
Recent