During a press event at its Shenzhen headquarters today, Huawei revealed that the device is unlikely to get released before November. However, the company is certain that the Mate X will launch by the end of the year.

Originally expected in June, Huawei delayed the Mate X following Samsung's Galaxy Fold debacle, announcing that the device would arrive in September. “We don’t want to launch a product to destroy our reputation,” a spokesperson said.

Despite the delays, the Mate X will only see minor refinements:

The only changes coming to the final version are a slimmer lock button that runs flush when the phone is placed flat, and refinements in the 'Falcon hinge' - but the hinge won't be carbon fiber, as some have predicted.

Notably, Huawei is already working on ideas for the next generation Mate X which include adding more displays. Apparently, the company working to swap out the steel rear cover with a glass back that could become a usable, touchable display. 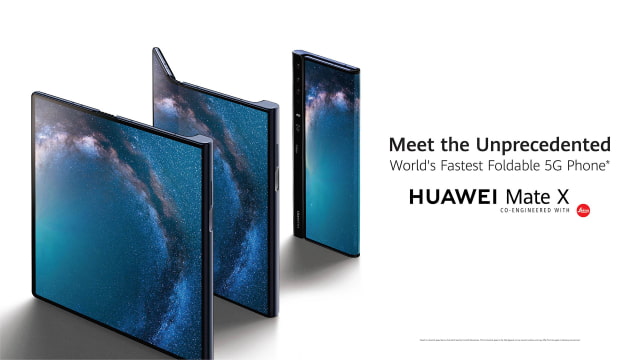 Great! - August 16, 2019 at 12:06am
Everyone is waiting for Apple to come out with theirs first so they can copy it. No one dares to risk a crappy foldable phone.
Reply · Like · Mark as Spam

nocci - August 17, 2019 at 12:15pm
And then they'll have the balls of steel to try in sheer desperation to claim whatever feature is better to pass off as a more suitable choice, but only after they copy a better implemented design.
Reply · Like · Mark as Spam
Recent