Apple says the iOS app economy has created 300,000 new jobs since April 2019. This estimate is based on research by Dr. Michael Mandel at the Progressive Policy Institute.

Since the App Store launched in 2008, the iOS app economy has become one of the fastest-growing sectors of the economy. Despite the pandemic, the App Store continues to provide economic opportunities for entrepreneurs of all sizes, helping anyone with an idea reach customers around the world and take advantage of new opportunities that would never be possible without it. The App Store ecosystem now supports more than 2.1 million US jobs across all 50 states — an increase of 15 percent since last year — as part of the 2.7 million jobs Apple supports across the country.

In Texas, the app economy reportedly added 36,000 new jobs in the past year, an increase of nearly 30 percent. Maryland added 25,000 jobs since last year and Michigan added 12,000, up 34%. Smaller states, including Alabama, Nevada, and Oklahoma, saw double-digit increases during the same period.

Apple also notes that it employs over 90,000 employees across all 50 states and says it's on track to fulfill its commitment to contribute $350 billion in the US over a five-year period. Apple also supports 450,000 manufacturing and supply chain jobs through its work with 9,000 American suppliers. 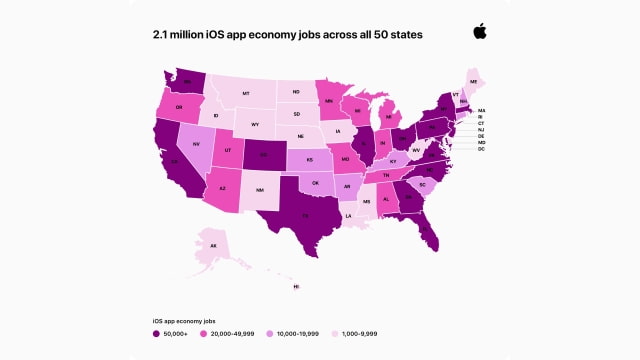