Algoriddim has updated its djay Pro AI app for iPad with a gesture-based control system.

Users can choose from a set of intuitive hand gestures to scratch, create loops in perfect sync with the beat, and apply filters and effects simultaneously; or simply lean back and perform a clap gesture which triggers an automatic transition from one song to the next. Leveraging the power of Apple’s new A14 Bionic chip on iPad, these hand gestures are intelligently detected in three dimensional space and mapped to advanced DJ performance techniques in real time, with maximal accuracy and instantaneous reaction time.

“The ability to mix music using djay Pro AI’s intelligent, built-in hand tracking technology represents a fundamental change in how DJs are able to orchestrate mixes and adds a new visual dimension to live DJ sets,” said Karim Morsy, CEO of Algoriddim. “Gesture Control is a new paradigm with implications beyond DJing and music creation. It is a major step forward with how people interact with mobile technology.”

Gesture Control is available as a free update from today for existing users of djay Pro AI on iPad. The update also introduces a host of new features including enhanced MIDI control and seamless access to users’ music files on Dropbox or Google Drive. Moreover, users can now show a visualizer alongside the virtual turntables and choose between live photos, streamed music videos from TIDAL, or a favorite video from their device’s camera roll. 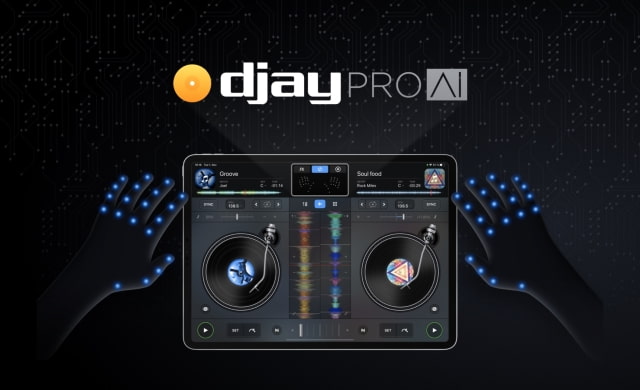 You can download djay from the App Store at the link below.