XianLi has released a payload for iLiberty+ (Mac) which fixes installer issues on versions 3.x! A windows version is expected soon...

The payload fixes the "Main script execution failed" error and "Package download failed" error that some experience with Installer 3.x. Both these errors are related to a permissions issue.

If you have not used iLiberty+ for your iPhone, iPod touch it will rejailbreak it while installing this payload. To prevent losing your sources and installed apps you can backup the /var/mobile/Library/Installer folder using SSH, Term-VT100, or MobileFinder prior to using the payload.

If you have used iLiberty+ to jailbreak then only the fix will be applied.

Once the payload has been installed you can then upgrade to Installer 3.11 and overwrite the /var/mobile/Library/Installer folder with your backup.

You can download the Payload here. Also more information can be obtained at hackint0sh here 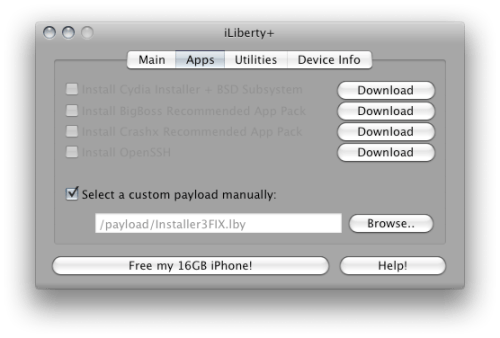 XianLi - May 25, 2008 at 1:15am
Just use iLiberty+ and check the "Jailbreak + Installer" option only (all the other options must be unchecked). Then click Free my phone. It will only re-jailbreak and re-install Installer.app 3.0.1 And next time stay away from StronZiPhone. ;)
Reply · Like · Mark as Spam
0

redrum - May 22, 2008 at 10:17am
hi iclarified, i have a 11.2otb and i have upgarde to 114,3.9 boaderloader with ziphone2.5gui. everythings was fine and doing good untill i started to download all the things i wanted which i know what to download but then after all the installation i restart my iphone then then problem start. everythings worked good excepted for the installer which i couldn't see it anymore, its just go back to the main springboard. how am i to go about it without effecting the download i did. with a big thanx in advance.....
Reply · Like · Mark as Spam
Recent