iPhone 3G combines all the revolutionary features of iPhone with 3G networking that is twice as fast(x) as the first generation iPhone, built-in GPS for expanded location based mobile services, and iPhone 2.0 software which includes support for Microsoft Exchange ActiveSync and runs the hundreds of third party applications already built with the recently released iPhone SDK.

"As the wireless provider voted number one in wireless satisfaction(x), Fido is thrilled to offer a variety of well-priced voice and data plans making iPhone 3G accessible to as many of our customers as possible," said Sylvain Roy, Senior Vice President and General Manager, Fido. "These pricing plans will allow our urban customer base easy enjoyment of all that iPhone 3G has to offer." 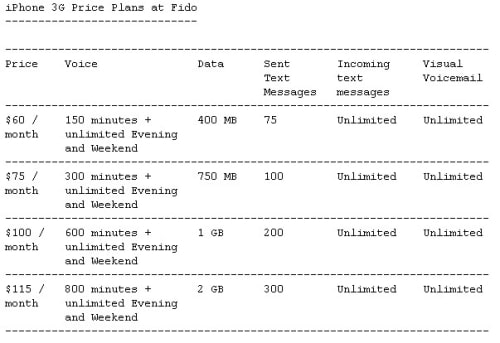