Jay Freeman, also known as Saurik the founder of Cydia, has filed a lawsuit against Cydia.com for allegedly infringing on the Cydia trademark.

According to DomainNameWire, Saurik lost an attempt to gain ownership of the domain under the uniform domain name dispute resolution policy (UDRP) in March. Saurik launched Cydia in 2008; however, the domain was registered by its current owner in 2002.

The lawsuit is asking for an order which will compel VeriSign to transfer the domain name to Saurik and compensate him for attorney fees and costs incurred.

The court filing reveals that Saurik registered the Cydia trademark with the USPTO but does not reveal why he lost the UDRP case. It's possible that Cydia.com used the name in commerce before Saurik thus granting them the rights to the name despite their shady use of the mark. Reportedly, Cydia.com demanded profit-sharing in order to release control of the website and even changed its content to specifically target iPhone users. CYKON the company that owns the domain has over 600 domains registered and by all indications seems to be a cyber squatter. In the United States, cyber squatting is illegal according to the Anticybersquatting Consumer Protection Act. 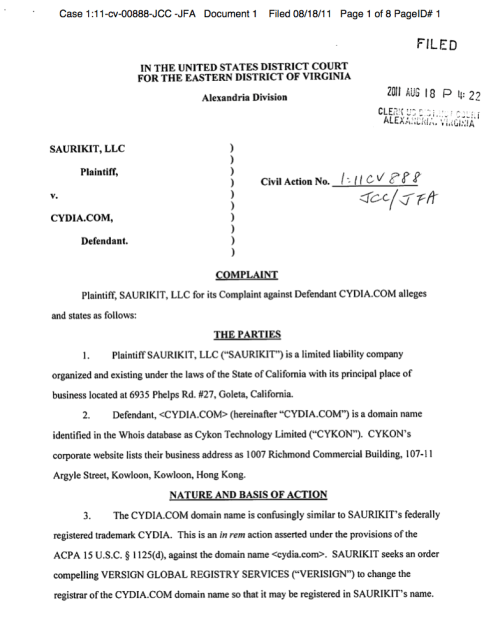 as if this makes sense - August 23, 2011 at 11:32pm
I wanna make sure i got this correct. Some company registered a domain name. Then 6 years later Saurik uses the name ( by the way, how in the heck did Saurik come up with that unusual name or where the two parties involved previously), the company has the site and does nothing with it but it get visits from people looking for information on Saurik who DIDNT register the name? Said company also has a disclaimer that says not affiliated with Saurik LLC, but they are at wrong? This is why the freaking world is hating on America. First Apple sues everybody for anything even spoken with their so vague patents... now, this? Fraking just register SAURIK.ORG or something like that and move on developing CYDIA.
Reply · Like · Mark as Spam

Baxter - August 23, 2011 at 11:55pm
You pretty much summed it up but you are overlooking a couple of things. The main problems are 1) Saurik is claiming they have/had Cydia-related content on the page & 2) whether their intent is to actually use the site or sit on the name until someone coughs up big $$ for it, which IS illegal BTW and means they never deserved to get the name in the 1st place. We don't know enough about the circumstances from a short post like this, so it will be up to Saurik (& his lawyers) to prove whether the company is violating the 2 items above and a decision to follow based on findings. I would assume Saurik feels he has some merit or he wouldn't pursue & then simply register a diff name.
Reply · Like · Mark as Spam

Baxter - August 23, 2011 at 9:08pm
They should sell Cydia.com to Saurik at a fair market price. That's the whole premise behind cybersquatting law. Obviously, they don't intend to use the name but are just holding on to it to capitalize. Just because some jerks hatch up a get-rich quick scheme by registering numerous domain names, doesn't mean they should be allowed to. It's very easy to register names so if cases like this continue, then we all suffer as government will eventually step in & force us to fill out a bunch of paper work to justify a name, which means more government infringement, & higher taxes/deficit.
Reply · Like · Mark as Spam

Jeff - August 23, 2011 at 9:23pm
So 6 years from now I should be able to register a trademark of a domain name that already exists today and they should be forced to hand it over to me right? Get a grip.
Reply · Like · Mark as Spam

Frank - August 23, 2011 at 9:38pm
yes, if they are doing nothing but putting spam on it and trying to sell it for profit. if you are legitimately using it, that is another story.
Reply · Like · Mark as Spam
20 More Comments
Recent