A new study by Flurry reveals that iOS and Android games are crushing Nintendo and Sony.

The most striking trend is that iOS and Android games have tripled their market share from roughly 20% in 2009 to nearly 60% in just two years. Simultaneously, Nintendo, the once dominant player, has been crushed down to owning about one-third of market in 2011, from having controlled more than two-thirds in 2009. Combined, iOS and Android game revenue delivered $500 million, $800 million and $1.9 billion over 2009, 2010 and 2011, respectively.

Flurry notes that Nintendo is facing its first fiscal year loss since the company began reporting profits in 1981 and suggests that the company may need to make drastic changes to stay afloat. 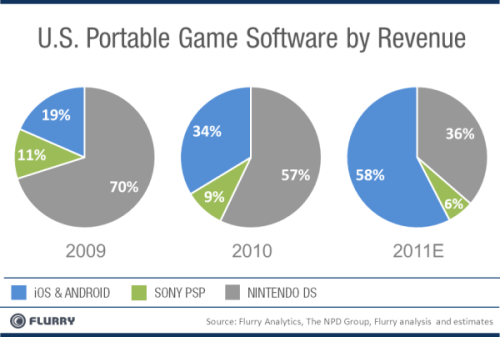 Russell - November 10, 2011 at 5:22pm
The convenience of downloading cheap, and sometimes free games is very compelling.
Reply · Like · Mark as Spam

Hammid Shahrokni - November 10, 2011 at 5:38am
This hurts so bad inside of me, to witness Nintendo's handheld systems' regressing sales. =( The quality of Nintendo games is something beyond... I hope Nintendo figures something out, ASAP!
Reply · Like · Mark as Spam

pkmaximum - November 10, 2011 at 6:20am
I think I know the solution! Release a clunky add on to the 3ds so people will have two thumb sticks. Nintendo should just make with a new 3ds model before stocks keep plummeting. Personally though I would have rather seen another handheld revision all together; dual-screens is the way I view the Wii, just gimmicky. We need to say new bold innovation that captivates us in different ways than before...and in my opinion 3D isn't the way to do so.
Reply · Like · Mark as Spam