Consumer groups in eleven countries have written letters to national regulators asking them to put a stop to Apple's misleading advertising on product warranties.

Apple products say they come with a one-year warranty when European Union law says they must cover goods for two years. Consumer groups say Apple is misleading customers into purchasing extended warranties when they are already covered by law.

Bloomberg notes that Apple has already been fined $1.18 million in Italy but plans to challenge that ruling.

Apple will challenge a 900,000-euro ($1.18 million) fine from the Italian competition regulator at a March 21 hearing. The regulator in December said Apple breached EU legislation for unfair commercial practices and misled consumers by "prominently advertising" that its products have a one-year manufacturer warranty, and through the sale of its "AppleCare Protection Plan" warranty extension.

"Consumers should not be misled and confused as to fundamental EU consumer rights because a company wants to sell their commercial warranty services," Monique Goyens, director general of the European Consumer Organization. 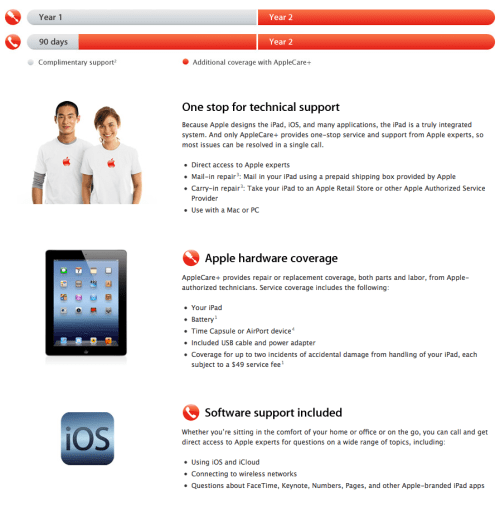 tatu - March 23, 2012 at 1:47pm
I once called Apple customer support to claim a repair after the one year warranty offered officially by apple in the Netherlands. A very kind woman told me that I will have to pay for it because my year of warranty was over. I inform her that by law I have the right to get 2 years warranty and without hesitation she gave the authororization for the repair. Later that year I met a guy who used to work for Apple customer service in Ireland and told me that the policy is to deny warranty repairs after the first year. If the customers mentioned about the EU law that covers for 2 years then they were instructed to authorize the repair. This to me is a very conning attitude towards the customer. That means that they will rip you off if they can. shame on Apple!
Reply · Like · Mark as Spam

NoGoodNick - March 19, 2012 at 9:43pm
Yeah, we American's wouldn't mind them offering a valid warrantly here, either. By the way, you'll need that warrenty for the batteries, which have been known to balloon to 3-5 times their designed size, breaking the displays. Apple is pretty good about taking care of them, though people should be aware of the problem.
Reply · Like · Mark as Spam

Norup58 - March 20, 2012 at 6:30am
What's your point?? If anyone is a stickler for wanting people to follow their rules is Apple. As the EU consumer has 2 years warranty on all items purchased then Apple has to abide by this legislation if the iDevice is purchased from Apple directly. Apple can sell their products through third parties and avoid the 2 years warranty but the third party is then responsible for the 2 year warranty. It is a consumer right!
Reply · Like · Mark as Spam

Alex - March 20, 2012 at 8:17am
Just another xenophobic Amerian anwer. Why should we Europeans stand for being ripped off by the richest consumer electronics firm, especially as it is our LAW that says there haas to be a two year warranty o products? Your slur about "getting a job"is downright low!
Reply · Like · Mark as Spam
3 More Comments
Recent