Following the Fair Labor Associations report on working conditions at Foxconn, a plan has been instituted to reduce employee hours; however, it appears that most workers don't want to work less hours.

M.I.C Gadget first reported on the issue a few days ago noting that Foxconn workers are losing income that they rely on to make ends meet.

"My base pay is 2,350 yuan, and I need to pay 190 yuan for social security tax, 120 yuan for housing fund, 110 yuan for accommodation fee, and some money on having meals. I'm going through a difficult time for this month," said one worker who had his hours reduced.

Reuters interviewed numerous other employees who felt the same way.

"We are worried we will have less money to spend. Of course, if we work less overtime, it would mean less money," said Wu, a 23-year-old employee from Hunan province in south China.

"We are here to work and not to play, so our income is very important," said Chen Yamei, 25, a Foxconn worker from Hunan who said she had worked at the factory for four years. "We have just been told that we can only work a maximum of 36 hours a month of overtime. I tell you, a lot of us are unhappy with this. We think that 60 hours of overtime a month would be reasonable and that 36 hours would be too little," she added. Chen said she now earned a bit over 4,000 yuan a month ($634).

The FLA report surveyed workers and found that:
● 48% thought that their working hours were reasonable
● 33.8% stated that they would like to work more hours
● 17.7% of the respondents felt that they worked too much

That amounts to 81.8% of workers who are happy with the hours they work or want to work more hours.

The FLA also said that in all focus group discussions about working hours, employees raised concerns that stricter working hour regulations would lower their income, yet the FLA has prompted Apple and Foxconn to reduce worker hours, perhaps in an effort to increase employee happiness and reduce suicides. It would appear that this may in fact have the opposite effect causing employees who are struggling financial or sending money to their poor families to be under increased stress due to their now lower income.

Foxconn is planning to reduce working hours to 49 per week, including overtime. 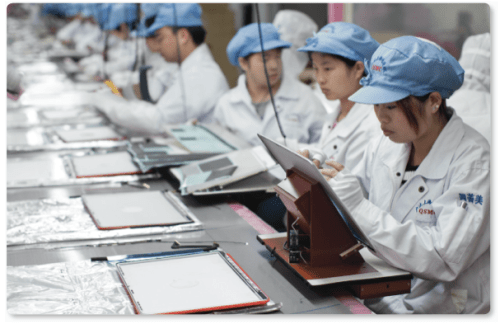 Tim - March 31, 2012 at 2:48pm
Being an American Chinese travel and trading between two countries....this is what I notice: being an American, lucky sperms.
Reply · Like · Mark as Spam

Bobby Goldman - March 31, 2012 at 3:08am
Stupid muppets. These chinese morons are more lazy than american morons. You have to work assholes mark my words or else
Reply · Like · Mark as Spam

Karl Marx - March 30, 2012 at 7:33pm
Battle cry of the Western Liberal: "I don't understand what went wrong. We were just trying to help these people. It isn't our fault that we completely screwed things up for them!"
Reply · Like · Mark as Spam

Vang - March 30, 2012 at 6:59pm
This is why you have to love America. You can make whatever you can make. Of course people will argue with this. Simply put. No brains or excuses.
Reply · Like · Mark as Spam

Tou - March 30, 2012 at 5:34pm
They did not ask for no such thing, it was force on them by who else us (USA) ways of living and trying to impose it on those folks. I would be too. I know first hand because my mother worked two jobs when she came to the stated twenty years ago to have enough money to send back home to us because they were no jobs back home. The problem with most american born is their lack of understanding of other country's cultures and ways of living. USA's ways are usually not the best for those people, but somehow we think we are the best and we know it all when in fact its the opposite.
Reply · Like · Mark as Spam
5 More Comments
Recent