The Australian Competition and Consumer Commission wants Apple to change the name of its iPad models, according to The Sydney Morning Herald.

The watchdog group thinks Apple is confusing customers by selling the iPad Wi-Fi + 4G and took the company to court on March 27th.

Apple already changed the wording on its website to warn customers that the iPad is not compatible with Australian 4G networks and offered to refund any confused customers but apparently that's not good enough.

Mediation between Apple and Australia's competition watchdog has ended without a resolution. The next phase of the case will be determined at a directions hearing this afternoon before Justice Mordecai Bromberg of the Federal Court in Melbourne. 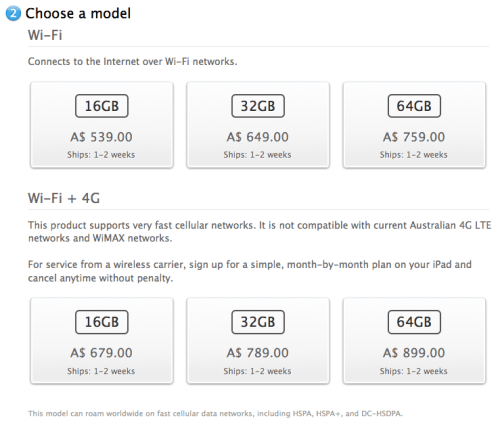 Big Black Azz - April 17, 2012 at 4:59pm
you guys crack me up! a foolish american asshole talking trash with an ignorant even bigger asshole australian stick with wifi boys there is a standard there and it works everiwheer
Reply · Like · Mark as Spam

David - April 17, 2012 at 7:54pm
Cheers T-Bone for the Heads-Up; it's not as though I needed it though. Nor does it matter if a couple of American crackers call me "ignorant" and what in Australian English is an 'Arsehole'. I don't think I'm that, but if that's what I am, simply because I derive enjoyment out of antagonising blow-fly yanks, then so be it. If I had a dollar for every time I e been called an arsehole, I'd be in the 1%.
Reply · Like · Mark as Spam

Mick - April 17, 2012 at 6:14am
I'm an Aussie, and I know that there is 4g currently in use with other mobiles, so Im more than a little confused as to why the handshake can't take place. Is it because the iPad uses a frequency in oz used for tv? Isn't it simply a matter of retuning the sensitivity? Or making in fact Australian models, just like the cars (left hand drive). I mean to say, is there a solution, or is it going to be diatribe until someone gives.
Reply · Like · Mark as Spam

Kornmehl - April 17, 2012 at 7:08am
Mick, I rather believe that the erroneous iPad frequency is not limited to Australia, but is an issue for all units sold throughout the world. Australia is of course not the only country that uses the 1800 MHz bandwidth for 4G; most of Europe and Asia use that standard. Why Apple insists on defying that benchmark, simply because they're based in the United States is utterly beyond me. In any case, should Justice Bromberg hand down the verdict in favour of the ACCC, it will set a precedent for every other nation where the current iPad is sold; in short, Apple will be up for Billions in replaced units, and that is after all, what Cupertino is so afraid of.
Reply · Like · Mark as Spam

Geoffrey - April 17, 2012 at 10:11am
Mick - Kornmeal is completely FULL OF SHIT. Here is the fact. There is no standard for 4G. So the only people who could be found 'guilty' would be the international standards folks who have failed to establish a standard. Not Apple's fault that they chose to go with the frequency that matters the most, which is what the US uses. After all, who gives a crap about some dumb Aussies?
Reply · Like · Mark as Spam
20 More Comments
Recent